Though country music today tends to be associated with conservative values, it has historically been rife with progressive messages. From Johnny Cash’s work to achieve prison reform to Loretta Lynn singing about “The Pill,” the genre has time and again challenged audiences with a variety of social messages; however, changes those political boundaries would then be pushed to their limits when the Dixie Chicks said they were “ashamed” of President George W. Bush following the tragic event of 9/11 and just before the Iraq Invasion.

In recent years, many alternative country artists have returned to the genre’s roots of socially-progressive storytelling. From its beginning to 2019, prepare to ask, “What is country music? What does real country music sound like and what are themes at the heart of its values?”

T.I. Addresses Backlash Over Having His Daughter’s Hymen Checked 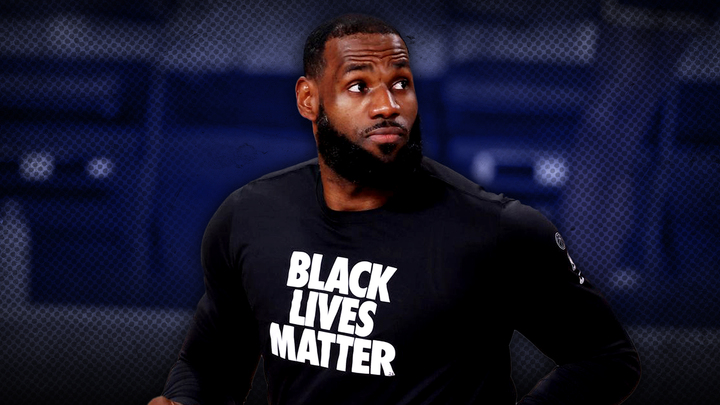 A new survey of American voters has determined the celebrities with the most trusted opinions on political and social issues, according to The Hollywood Reporter.

The survey was conducted by Whitman Insight Strategies and MRC Data. It polled 1,103 likely voters across the U.S. from Oct. 8-13 to examine the intersections of entertainment, influence, and politics ahead of the election. Of those surveyed, 48% were male and 52% were female.

Researchers asked voters to specify whose opinion they trusted most, as well as name the issues they wanted celebrities to address. Topics included issues like ike COVID-19, racial justice, healthcare, climate change, and more.

Overall, 12% of people surveyed reported that an entertainer or athlete influenced their thinking regarding the election. Influence was reported higher among specific groups. According to the data, 28% of Black voters said they were influenced by a star regarding the election, as did 20% of Hispanic and Latino voters, 17% of LGBTQ voters, and 17% of both Gen Z and Millennials.

When it comes to political parties, 17% of Democrats surveyed said they were influenced by stars in comparison to only 9% of Republicans.

As far who has been most influential in terms of the upcoming election, among all those surveyed, 36% said that LeBron James has done the most to raise awareness and motivate people regarding voting.

Taylor Swift came in second with 13%, followed by Dwayne “The Rock” Johnson at 9% and Oprah Winfrey with 6%. Cardi B, Beyoncé, and Colin Kaepernick tied with 5% each.

Then, as far as whose opinion people trust the most regarding political or social issues in America, Tom Hanks came in first with 49%. He was followed closely by Johnson with 45%, Winfrey with 38%, and James with 32%.

Meanwhile, Kid Rock ranked as the most influential voice for Republican voters with 46%. He was followed by Ted Nugent at 43%, then Hanks (42%) and Johnson (41%).

For Gen Z voters specifically, Zendaya was named the star with the most trusted opinions, taking over 59% of the vote, followed by Beyoncé with 56%, and James with 43%.

In terms of issues, 75% of people said they wanted to see entertainers use their platforms to address social and political issues, specifically the COVID-19 pandemic, voting, and racial justice in America.

However, those numbers change by party, with 93% of Democrats saying they are open to it, as opposed to 54% of Republicans. Still, the numbers give a lot of insight into just how powerful it is for celebrities to use their platforms to push for change.

See what others are saying: (The Hollywood Reporter) (Billboard) (NME) 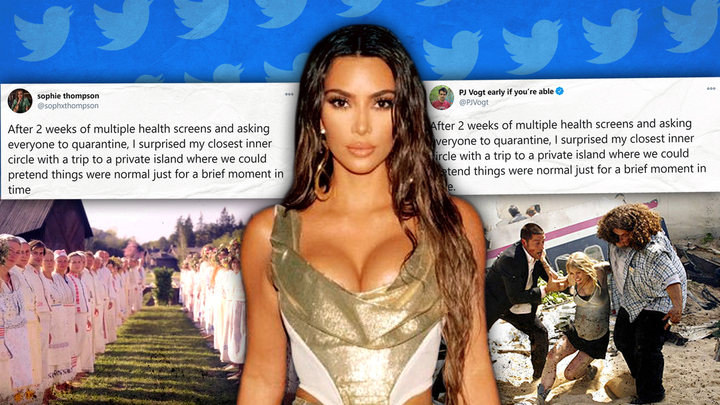 The reality star shared photos from her 40th birthday party, claiming that she feels “humbled and blessed” after celebrating with the people who helped shape her into who she is today. However, what followed was a series of statements that many found tasteless to make during the coronavirus pandemic.

“Before COVID, I don’t think any of us truly appreciated what a simple luxury it was to be able to travel and be together with family and friends in a safe environment,” she said.

“After 2 weeks of multiple health screens and asking everyone to quarantine, I surprised my closest inner circle with a trip to a private island where we could pretend things were normal just for a brief moment in time.”

Photos she shared showed her family and friends gathered closely together, hugging, posing for the camera.

“We danced, rode bikes, swam near whales, kayaked, watched a movie on the beach and so much more,” she continued. ” I realize that for most people, this is something that is so far out of reach right now, so in moments like these, I am humbly reminded of how privileged my life is. #thisis40”

As you can imagine, that rubbed a lot of people the wrong way because most of the world can’t run off to a private island to escape reality.

Keep in mind, this post came at a time when over 1.1 million people around the world have died from coronavirus. Millions more are unemployed or struggling to make ends meet. Many people haven’t even seen their own loved ones in months.

In fact, to many, her post sounded like: “Hi Poors! I know you’re hurting right now and can’t figure out how you’re going to feed your family, but please enjoy these photos of my family’s expensive vacation! I know I’m lucky to be so fabulously wealthy so I’ll make mention of it to sound sympathetic (I’m really not tho).”

Some were angry, viewing this as insensitive bragging. Others instead laughed about how out of touch she seems to be.

Are you that insensitive you don’t realise this is not what the majority of people during the worst covid spike yet want to hear? People are going to food banks not private islands.

A lot of people also hit back at her with that infamous Kardashian meme: “Kim, there’s people that are dying.”

Eventually, part of her post became a copypasta, with people tacking on photos of the island from “Lost”, the Fyre Festival, and other nightmarish places.

Kardashian-West has not addressed the responses to her remarks as of now, but the memes have continued to pour in.

See what others are saying: (CNN) (Mashable) (The Guardian)

“Among Us” Developers Scramble to Fight Off Pro-Trump Hacks 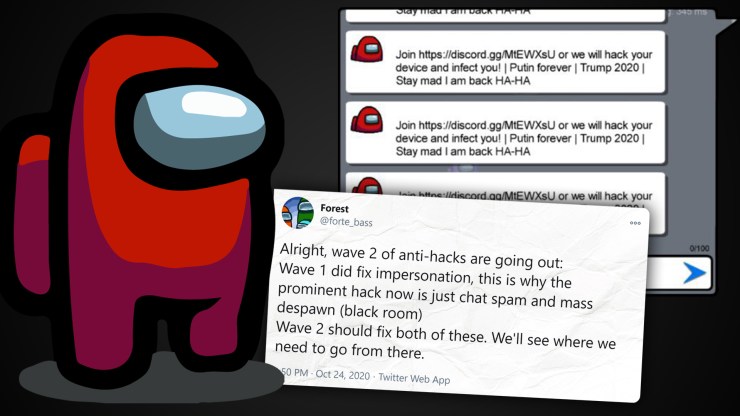 Hacker Target’s ‘Among Us’

Developers of the game “Among Us” are actively working to combat a hacker that has flooded the app with pro-Donald Trump messages since Thursday.

The multiplayer murder mystery game has grown in popularity this year thanks to support from Twitch streamers and users who found it particularly good to play during this age of social distancing.

Just last Tuesday, the game received extra attention when Rep. Alexandria Ocasio-Cortez (D-NY) hosted her first Twitch stream playing it with huge gamers like Pokimane, Valkyrae, Jacksepticeye, and others. The stream was part of a larger effort to encourage voting and ended up bringing in over 435,000 concurrent viewers.

However, by Thursday, users began reporting that the game was facing hacks. Players complained about their lobbies turning completely black, meanwhile, some were disconnected from games altogether.

Others reported spammed chat sections that told users to subscribe to Eris Loris on YouTube otherwise the hacker would “kill your device.”

The hacker also shared Twitter links, Discord links, and other pro-Trump messages, even writing “Hacked by Russians.” in some spam messages.

InnerSloth Rushes to Fight Back

Eventually, “Among Us” developer InnerSloth released a statement about the problem on Twitter.

“We’re are super duper aware of the current hacking issue and we’re looking into it,” it said. “We will be pushing out an emergency server update so people who are in game will get kicked from games. Please play private games or with people that you trust!!! Bare with us!! 😰”

One of the developers later said he was rolling out server updates, but warned that players would be impacted for an unknown amount of time.

That’s likely what actually happened since complaints continued throughout the weekend. By Saturday evening, the developer said he had rolled out “wave 2” of anti-hacks, but noted that there are some bugs and issues he’s already aware of.

If you try to play the game right now, you’ll be hit with a warning message about the problems as the game undergoes emergency maintenance.

In it, the developers reminded players that they were stopping plans for Among Us 2 as they focused on Among Us 1, which we know has exploded in popularity recently.

Many felt the hack was done in an effort to bring support for President Trump in front of the same audience that Ocasio-Cortez reached.

However, as far as the motive, all we know is that both Eurogamer and Kotaku claimed they made contact with the hacker, who has since been doxxed and threatened online.

They told Eurogamer they design and sell in-game cheats and consider this “a publicity stunt,” claiming to have affected 1.5 million matches.

They also said “I’m a college student and I support Trump,” adding that they hoped this generated publicity for the president as well.

But when speaking to Kotaku, they made it sound more like a trolling effort, saying, “I was curious to see what would happen, and personally I found it funny.”

“The anger and hatred is the part that makes it funny. If you care about a game and are willing to go and spam dislike some random dude on the internet because you cant play it for 3 minutes, it’s stupid.”

For now, it’s unclear if all the problems are close to being completely resolved, but this has put a harsh spotlight on InnerSloth’s small team.

See what others are saying: (NME) (PC Gamer) (The Verge)

Facebook Struggles With Roll Out of Election-Week Political Ad Ban

Increased COVID-19 Hospitalizations Are Straining Medical Resources in the U.S.

Facebook Struggles With Roll Out of Election-Week Political Ad Ban

Increased COVID-19 Hospitalizations Are Straining Medical Resources in the U.S.