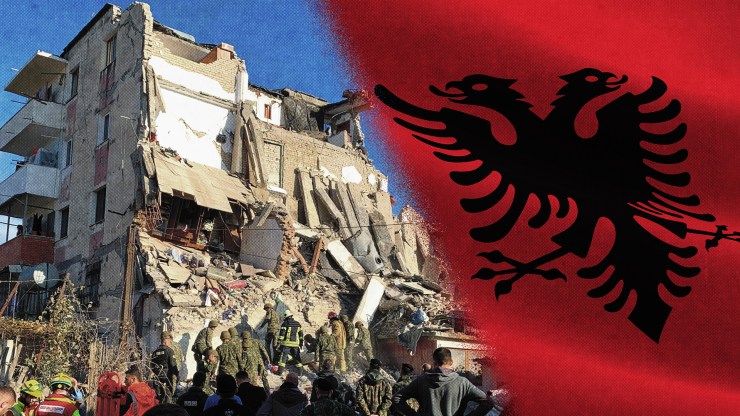 At least 18 people died and more than 600 others were injured after a 6.4 magnitude earthquake struck in the Balkan nation of Albania early Tuesday.

The quake, one of the strongest to hit Albania in two decades, struck just before 4:00 a.m local time and was recorded about 19 miles west of the capital of Tirana. The early morning shake was also followed by three aftershocks, with magnitudes between 5.1 and 5.4.

Videos posted on social media show the widespread destruction the tremor left behind, with collapsed buildings, crushed cars, and deep cracks in streets and sidewalks. Rescue teams are on the ground actively working to help anyone who may still be trapped under the rubble. Meanwhile, others who have been recovered are being transported to local hospitals for medical attention.

Health Minister Ogerta Manastirliu said that of hundreds who received medical attention for their injuries, nine are in life-threatening conditions.

As far as the death toll, Albania’s Defense Ministry initially reported that 13 people had died. Seven of the deceased were said to have been pulled from the rubble in the city of Durrës, a coastal port city. Five others died in a collapsed apartment in the northern village of Thumanë. Another person died in the town of Kurbin after jumping from a building in an attempt to escape.

But by the afternoon, the death toll rose to 18 after four more bodies were found in Durrës inside collapsed buildings.

Emergency teams are working quickly to prevent that number from rising, but the damage from the quake is immense.

While visiting Thumane, the town closest to the epicenter, President Ilir Meta described the situation as “dramatic” adding, “We hope to overcome it with the least loss. We must do every attempt to save the people stuck under the ruins!”

After later visiting Durrës, he added that many residents can no longer take refuge in their homes.“The consequences of the earthquake in Durrës are dramatic and require extraordinary organization, not only by the state, but nationwide!”

Nearby countries like Italy, Greece, Germany, Hungary, Turkey, and others have offered their help. The European Union and the United States also offered immediate support.

“Our country was hit by a wave of earthquakes like never before in the darkness of the early hours of today!” President Meta said in an official statement to residents. “It is important to work with dedication and professionalism to save every human life under the rubble of buildings and to help the injured. It is important to identify residents who cannot return to their homes and who need housing.”

Tuesday’s disastrous shake comes just two months after the country was hit by another significant earthquake. The previous quake, a 5.6 magnitude tremor, struck on September 21, causing dozens of injuries and damaging hundreds of homes.

See what others are saying: (The New York Times) (Al Jazeera) (AP News)

International Demonstrations Call for the End of Violence Against Women