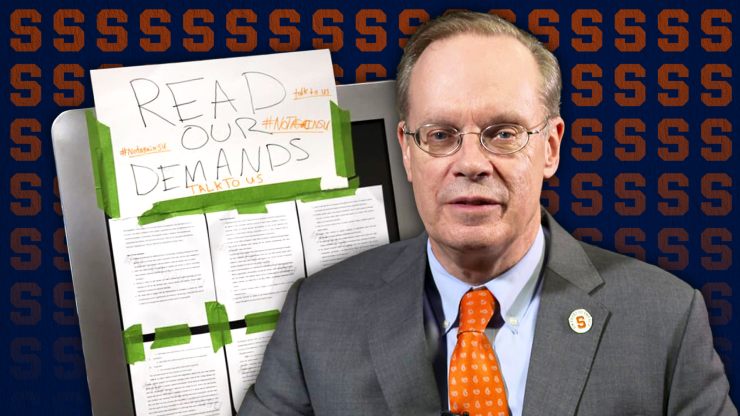 Following two weeks of racist incidents on its campus, Syracuse University’s Chancellor has agreed to the requests of student protestors.

Student activists engaged in protests and sit-ins on the campus, which has seen more than a dozen acts of racism. Starting on Nov. 7 and continuing for the next eleven days, racial slurs were written in campus buildings and shouted at students.

In one incident, a swastika was found by a student apartment. In a separate incident, fraternity social activities were suspended after students in one group were found to have been yelling the N-word at a black woman on campus.

On Monday, a white supremacist manifesto was airdropped to students. Notably, it was the same 74-page manifesto written by the suspect in the shooting in Christchurch, New Zealand, which left 51 people dead. While investigations led officials to believe it was a hoax, it still left students afraid to walk alone, go to class, and be on Syracuse’s campus.

Not Again SU, a movement led by black students at Syracuse in the wake of the racist incidents, staged a seven-day sit-in at a campus landmark.

They also created a list of 19 demands, which included expelling students involved with the hate crimes and related incidents, enrolling faculty and staff in diversity training, hiring more counselors that better reflect the identities of the student body, setting aside $1 million to create a curriculum that educates the campus on diversity, and implementing a 48-hour response system to racially motivated incidents. They also requested that any students participating in sit-ins not be punished and to receive monthly updates on the status of their demands.

Chancellor Kent Syverud did not initially agree to the terms, prompting students to call for his resignation. During a Wednesday night forum at a campus church, a student asked if he would agree to their list.

According to the campus paper, the Daily Orange, he responded by saying, “If the question is ‘Can I produce agreement to every word at this instant?’ The answer is I cannot.”

Students then stood up and chanted “sign or resign.” They walked out and proceeded to Syverud’s home where they continued to protest. He signed onto 16 of the 19 conditions the following morning, giving slight modifications to the other three.

In a statement, he said he made this choice to “support the thoughtful, forward-thinking and constructive solutions offered by many of our students.”

“Implementing these recommendations is the right thing to do. They will make our community stronger,” he added.

The student activists were not the only ones encouraging Syverud to take action. Before he agreed to sign on, many were expressing support for the protesters. Syracuse’s high profile basketball team tweeted in support of the movement.

New York Governor Andrew Cuomo released a statement on Monday calling the incidents “disturbing, not only to the Syracuse University community, but to the greater community of New York.”

He added that Syverud did not handle the matter “in a way that instills confidence.”

Not Again SU shared Syverud’s signature on their Instagram. They were met with messages of congratulations in the comments; however, it is unclear if they have agreed to his changes.

See what others are saying: (The Daily Orange) (NBC News) (Syracuse.com)