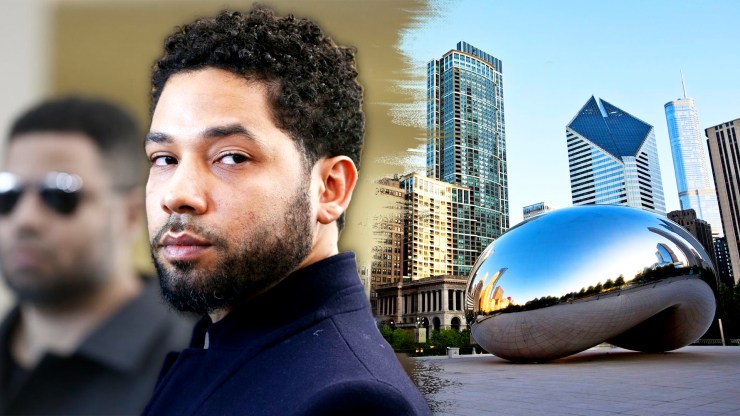 Former Empire actor Jussie Smollet is suing Chicago for “malicious prosecution” and says he should not have to reimburse the city for the cost of the investigation into his hate crime claims.

Smollett made headlines in January when he said two masked men looped a noose around his neck, poured bleach on him, and yelled homophobic and racist slurs.  But after an investigation, Chicago police determined that the attack was staged by Smollett, who was then indicted on 16 felony counts of filing a false report.

Smollett has maintained his innocence and prosecutors eventually dropped the charges against him in March, after he agreed to complete community service and forfeit the $10,000 bond he paid following his arrest.

Now his lawyers are using that as a defense for why he should not have to pay for the cost of the investigation.

Smollett’s lawyers filed a two-count counterclaim against Chicago on Tuesday in response to its April lawsuit demanding that he pay over $130,000 to cover the 1,836 hours of overtime paid to police officers working his case.

In the city’s lawsuit, it said it also intended to seek attorneys’ fees and a civil penalty of $1,000 for each of his false claims. However, Smollett’s legal team says the city “is not entitled” to any of this.

Smollett’s lawyers argued the city should not be allowed to hold him liable for the cost because it accepted the $10,000 from the actor “as payment in full in connection with the dismissal of the charges against him.”

The counterclaim adds, “The City cannot seek additional recovery from Mr. Smollett under the doctrine of accord and satisfaction.”

His attorneys also accused the city of “malicious prosecution,”  saying that Smollett suffered “humiliation, mental anguish, and extreme emotional distress” as a result of the city’s actions against him.

The claim specifically called out Chicago Police Department Superintendent Eddie Johnson and two other detectives, Edward Wodnicki and Michael Theis. The counterclaim says police released “false and misleading information,” which led media outlets to report that Smollett might have arranged the alleged attack.

It also criticized the city for using claims from the Osundairo brothers, the men Smollett was accused of paying to carry out the alleged attack, to pursue criminal charges against him.

In response to the countersuit, Chicago police issued a statement Wednesday saying “The City stands by its original complaint and will continue to pursue this litigation.”

The city added, “The judge in this case has already ruled in our favor once, and we fully expect to be successful in defeating these counterclaims.”

The same day as Smollet’s counterclaim, Cook County State’s Attorney Kim Foxx officially announced that she is running for reelection. Foxx currently has four challengers fighting for her spot and has the outrage over the Jussie Smollett case hanging over her head.

Foxx recused herself from the case before Smollett’s arrest, saying she did so because she had conversations about the investigation with one of Smollett’s relatives. But a few months later, her office released documents citing a different reason, showing that she was advised to withdraw based on unfounded rumors that she was related to Smollett. Though she disagreed with the advice and called the rumors racist, she complied with the recommendation.

At the time, Chicago Police Department commander Ed Wodnicki called the reversal of charges a “punch in the gut” and said prosecutors did not discuss their decision with the police department prior to announcing it.

Meanwhile, then-Mayor Rahm Emanuel and superintendent Johnson spoke out against the decision. “This is without a doubt, a whitewash of justice and sends a clear message that if you are in a position of influence and power you’ll get treated one way, other people will be treated another way,” Emanuel said.

In her campaign ad, she admitted to mishandling the Smollett case but argued that her opponents are attacking her personally over it to “undercut progress.”

“Truth is, I didn’t handle it well. I own that. I’m making changes in my office to make sure we do better. That’s what reform is about,” Foxx said.

But her opponents say it’s too late, and many believe the lack of trust surrounding Foxx’s leadership will affect her in her bid for reelection.

See what others are saying: (Fox News) (The Washington Post) (Chicago Sun-Times)