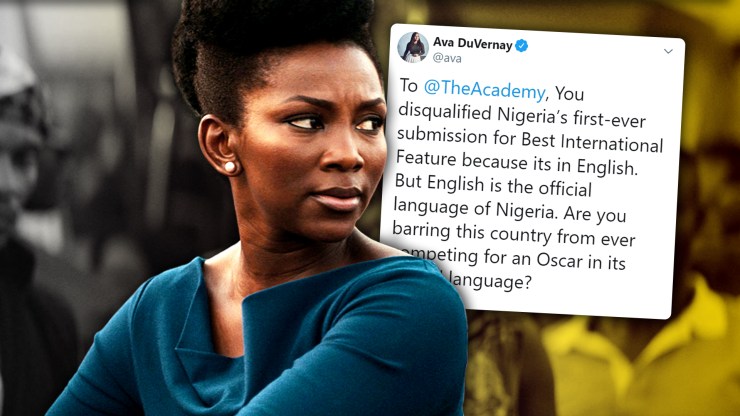 Leaders in the film industry are speaking out after Nigeria’s first submission to the Acadamy Award’s Best International Feature Film category was disqualified for being primarily in English.

According to a report from The Wrap, The Acadamy sent out an e-mail Monday announcing that Lionheart is no longer eligible for the award formerly known as Best Foreign Language Film. Lionheart was directed by Nigerian actress and filmmaker Genevieve Nnaji, who also stars in the film.

Of the film’s 95 minute run, less than 15 minutes are in Igbo, a language native to Nigeria, and the rest is in English. The Academy defines an international film as “a feature-length motion picture (defined as over 40 minutes) produced outside the United States of America with a predominantly non-English dialogue track.” English, however, is Nigeria’s official language.

When the Oscars initially announced the list of submitted films in October, Lionheart appeared on the list, but it had not yet been reviewed by the International Feature Film Award Executive Committee. A recent viewing prompted the disqualification and an upcoming screening of the film for voters has been canceled.

Reactions to the Disqualification

Because Nigeria’s official language is English, this decision sparked backlash from members of the film community. Director, writer, and producer Ava Duvernay, who is behind projects like Selma and When They See Us, tweeted to the Academy about the news.

She also compared Nigeria’s use of English to former French colonies’ relationship with France and the French language.

The idea of colonization became a major talking point in the online discussion of Lionheart’s disqualification. Nigeria was colonized by the British, which is why English is spoken there to begin with.

“So now we are getting penalised for having been colonised by Britain?” writer and journalist Afua Hirsch asked.

The news of Nigeria being barred for submitting a film in its own official language started a discussion on what it should mean to be classified as a foreign or international film, as well as discussion over how the Oscars should adopt this in their rules. Lulu Wang, who wrote and directed The Farewell, asked questions about how we should define these concepts.

One user pointed out that other award shows have updated their rules after people protested them for being outdated or unfair.

Another suggested that there be two categories for foreign films so more could be included and the rules could be applied in a more even manner.

The Nigerian Oscar Selection Committee responded to the Academy’s decision themselves. In a statement obtained by Variety, they said that many movies in the Nigerian film industry use English to obtain a wider reach.

“The budding Nigerian film industry is often faced with producing films with wide reach which often makes the recording dialogue predominantly English with non-English infusions in some cases,” they said.

They later added that this disqualification was “an eye-opener and step forward into growing a better industry” that could urge filmmakers “to shoot with the intention of non-English recording dialogue as a key qualifying parameter to represent the country in the [contest for the] most prestigious award.”

The Academy has not made a statement on the matter. Lionheart is still eligible to submit itself for Best Picture and other awards. Foreign-produced films, however, rarely make it to these slots and none have ever won the top prize.

See what others are saying: (The Wrap) (Variety) (Los Angeles Times)

Deprogramming: The art of getting people out of a cult.