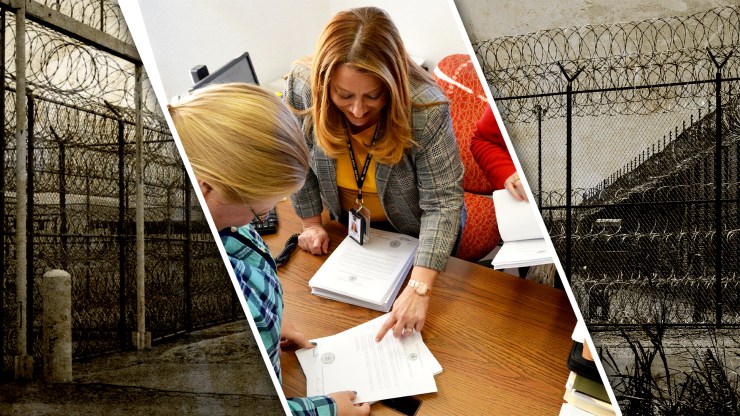 After the state of Oklahoma commuted the sentences of more than 500 inmates convicted of nonviolent crimes, most of those inmates were released from prison on Monday.

The move follows Friday’s unanimous vote by the Oklahoma Pardon and Parole Board to commute the sentences of 527 prisoners. Republican Governor Kevin Stitt then announced he had approved 524 of the requests on Twitter and hailed the move as a “historic step towards criminal justice reform.”

Of those inmates, about 460 were released on Monday, with the others having detainers against them. Nonetheless, the release is the largest mass commutation in U.S. history.

Video from the Kate Barnard Community Correctional Center shows one inmate being released after a three-year incarceration and dropping her box of belongings as she embraces her daughter.

Oklahoma has one of the highest incarceration rates in the nation. Prior to the commutation, Oklahoma prisons housed a population of more than 26,000. According to the Oklahoma Policy Institute, more than 1 in 100 adults in Oklahoma are in prison at any given time.

The Pardon and Parole Board said the mass commutation is expected to save the state almost $12 million dollars by abbreviating the sentences of those inmates.

Prison reform in Oklahoma gained traction in 2016 when voters approved a ballot measure known as Question 780, which reclassified certain crimes from felonies to misdemeanors, including simple drug crimes and nonviolent property crimes under $1,000.

At the same time, voters approved a co-measure, Question 781, which then allowed any savings earned from bypassing incarceration to go directly to counties for drug treatment and rehab services.

Both laws then went into effect in 2017, but they did not apply to people convicted of committing similar crimes before they went into effect, meaning those prisoners would still be considered felons on their record and they would still have to serve their sentence.

In January this year, lawmakers proposed allowing Question 780 to apply retroactively, and in May, the proposal became law after finding bipartisan support.

According to Stitt, in addition to commuting the sentences of hundreds of inmates, the retroactive would also reduce the sentences of another 1,400 people serving time for different crimes.

The law went into effect on Friday, and 814 prisoners then appealed to have their sentences commuted in a special one-stage appeal process. In all, 287 inmates were denied, with the board saying it denied certain appeals if an inmate had offenses like a record of serious misconduct or a registered victim. It also denied appeals to sex offenders and violent offenders.

Under the new law, Stitt said he expects the state to commute about 2,000 people by the end of the year.

Because this massive commutation was anticipated once the retroactive law took effect, the state’s Department of Corrections also saw another first when it held what it called “re-entry fairs” at 28 different prisons.

Those fairs were aimed as a way to connect inmates to housing and counseling support prior to their release. Prisoners were also able to get state ID’s or even licenses before being released, which is expected to be a massive help to them as such actions can be difficult after leaving prison.

“With this vote, we are fulfilling the will of Oklahomans,” Steve Bickley, executive director of the board, said on Friday. “However, from Day One, the goal of this project has been more than just the release of low-level, nonviolent offenders, but the successful re-entry of these individuals back into society.”

US Citizen Accused of “Invading” Country Before Acid Attack