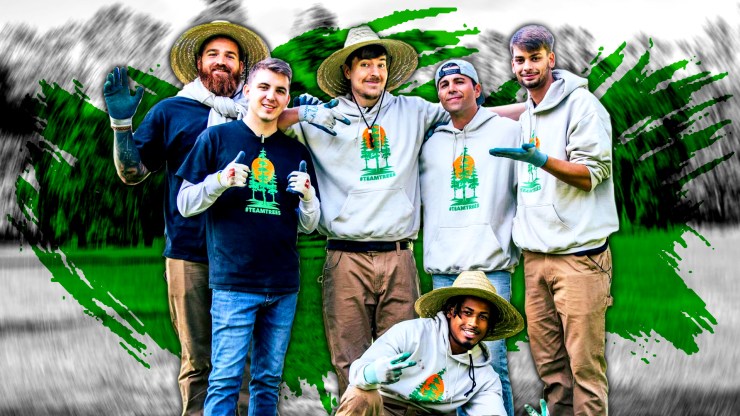 MrBeast, whose real name is Jimmy Donaldson, is well known on YouTube for charitable stunts and crazy challenges involving huge sums of money. Earlier this year, a subscriber came up with the idea for MrBeast to plant 20 million trees, a request that quickly went viral.

In his latest video announcing the project, MrBeast said his fans spammed him with the request so often that he had to take on the challenge. He kicked off the campaign in Oregon by planting hundreds of trees with friends and fans in a large field. YouTuber Mark Rober, a former NASA engineer also joined in by using drones to plant trees.

But in order to reach his goal, MrBeast has collaborated with the Arbor Day Foundation – one of the largest nonprofit conservation organizations dedicated to planting trees. Together they launched the #TeamTrees website, where supporters can donate to the cause. For every $1 raised, one tree will be planted in an area of high need around the globe.

MrBeast pledged more than $100,000 himself and received support from other huge creators. On October 25 you might have seen dozen and dozens of videos flooding YouTube about the project, dominating the trending page, homepages, and recommendations.

Videos were shared by creators like Pewdiepie, Jacksepticeye, The Infographics Show, Guava Juice, The Try Guys, and several others. Huge donations were made by influencers like Jeffree Star, Ninja, Simply Nailogical, and Doctor Mike.

The list of supporters goes on and on, including big names like Safiya Nygard, The Slow Mo Guys, Marquees Brownlee, Jake Paul, and Casey Neitstat. According to The Verge, more than 600 YouTubers have expressed their support. YouTube even confirmed that they would cover all transaction fees for donations made on the platform.

Criticism of the Project

Despite massive praise for the campaign, MrBeast has seen some criticism from those who argue he should find more effective ways to fight climate change.

Some are specifically pointing out that it will take years before these new trees can make a considerable impact.

MrBeast responded to those comments saying, “Just to be clear we all realize 20 million trees won’t fix climate change. But at the end of the day 20 million more trees is better then 0! We want to take action because doing nothing is how we got here!”

Long term survival is key for trees to have an impact on our planet, so there must also be an effort to protect and nurture these new trees in order for them to help the environment. The Arbor Day Foundation’s director of public relations Danny Cohn said that some of the funds raised will be used to help maintain all of the trees planted.

“We’re just not planting and walking away,” he said.  He explained to The Verge that the partners who work with the organization are all required to have plans to help their trees thrive.

The organization said that it’s not sure what the survival rate is for its trees since the foundation itself does not do the planting. But they say the US Forest Service, which it partners with, estimates a 3 percent mortality rate per year.

There have also been concerns that too many trees will be planted in the wrong places, which can actually be damaging to some ecosystems  The Arbor Day Foundation addressed those concerns by noting that it partners with agencies like the US Forest Service, the National Park Service, and the National Association of State Foresters to ensure that they’re planting trees responsibly.

“We know that 20 million trees isn’t going to cure climate change, but the point here is to end this decade on a super strong note,” YouTuber Mark Rober said in a private campaign video to other creators. “It’s a constructive way to send a message to the politicians, ‘it’s freaking time to do something about climate change.’ Plus we just really love trees so this is like a fist pump to mother Earth.”

As of Monday morning, the campaign has earned about $5.7 million to plant trees around the globe, with that number steadily rising.

See what others are saying: (Insider) (The Verge) (Dextero)