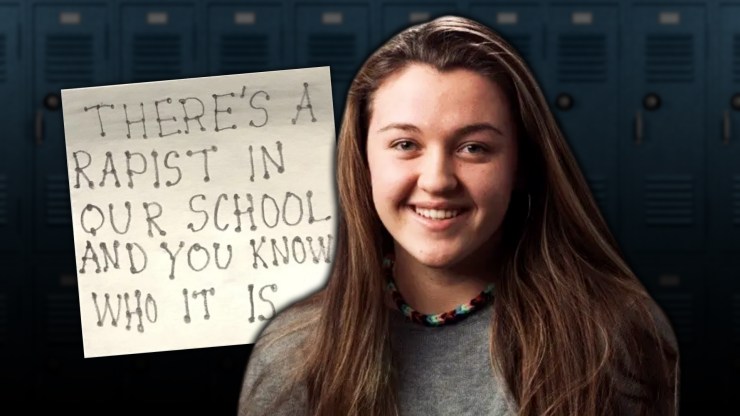 Posting the Note and Suspension

A judge blocked a teen’s suspension after she posted a rape awareness note in the girls’ restroom at her at high school, citing the student’s right to freedom of speech.

The note in question was posted on Sep. 16 at Cape Elizabeth High School and reads, “There’s a rapist in our school and you know who it is.”

“The public has an interest in knowing that neither she nor any other student who expresses a comparable view in similar fashion will be denied access to school simply because her viewpoint offends the sensibilities of school administrators,” U.S. District Judge Lance Walker said.

The sophomore who posted the note, 15-year-old Aela Mansmann, said she did so because she believed school administrators were overlooking other students’ claims of sexual harassment and assault. In fact, footage of a school board meeting in June later surfaced, showing Mansmann bringing similar concerns directly before administrators.

Soon after posting the note, however, a different student brought it to school administrators. Those administrators then discovered Mansmann had posted the note by reviewing security footage.

While Mansmann’s mother said the school originally told her daughter that she wouldn’t be punished for the incident, after Mansmann went public about the story to the media, she and two other girls were suspended for three days.

School officials said the note constituted bullying and added that if it happened again, the girls could be expelled. Mansmann’s family then appealed that decision, with administrators saying Mansmann could continue to go to school while an investigation was pending.

Principal Jeffrey Shedd said he conducted 47 interviews over three weeks, later calling the girls’ note well-intentioned but also noting that they “made a really bad choice.”

During that investigation, a male student stepped forward and claimed he felt targeted by the note and had been ostracised by classmates. That student then said he’d missed class because of what happened.

Meanwhile, on Oct. 7, about 50 students at the school of 550 walked out in protest of the school’s decision to suspend the three girls.

Some local outlets even reported waves of gossip and fear at the school.

On Oct. 13 the American Civil Liberties Union sued the school district on behalf of Mansmann. It argued that the girls had taken a “public stance as an ally for victims and survivors of sexual violence” by using their First Amendment rights.

Specifically, Mansmann lawyers had requested a restraining order that would block the school from suspending her until the incident was resolved.

Mansmann, who has spoken with a variety of media outlets on the issue, has questioned why the school is focusing on her rather than on the accusation of rape.

The Cape Elizabeth School District hasn’t commented on how it handled the accusation, but school officials did say they don’t believe there’s a rapist on the campus.

In court, the district argued the note was nothing more than defamation, saying that it wasn’t protected under the First Amendment.

On Oct. 24, Judge Walker ordered a temporary block to the suspension, saying it would likely be overturned on the grounds of free speech. The judge also said it could be overturned on the basis of Title IX, which is a federal law banning gender discrimination in education.

In his argument, the Walker wrote that the notes was “neither frivolous nor fabricated, took place within the limited confines of the girls’ bathroom, related to a matter of concern to the young women who might enter the bathroom and receive the message, and was not disruptive of school discipline.”

He then said that more information would be necessary to justify punishment and that the school shouldn’t have the right to crack down on topics of social justice in areas of free student communication.

The ACLU hailed the decision, saying it’s a reminder that students “do not check their rights at the schoolhouse gate.”

As far as the school goes, Superintendent Donna Wolfrom said, “We will continue to review and update district policies to align with state law and meet the needs of the district.”

See what others are saying: (WMTV) (The Washington Post) (Bangor Daily News)