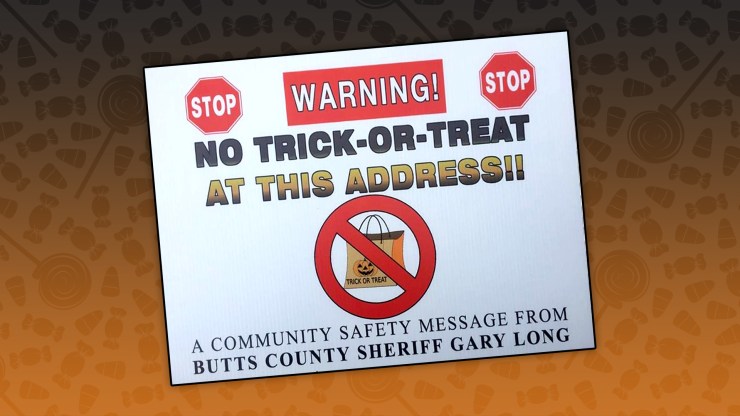 A group of registered sex offenders in Georgia filed a lawsuit against the Butts County Sheriff’s office for posting signs on their homes warning trick or treaters not to visit.

The signs in question read: “Warning! No Trick-or-Treat at this address! A community safety message from Butts County Sheriff Gary Long.”

According to Sheriff Gary Long, the messages were designed to keep kids safe, however, the sex offenders who filed the lawsuit argue they are a violation of their rights to privacy and have likened the policy to “compelled speech,” which violates the First Amendment.

The lawsuit was filed by Christopher Reed, Reginald Holden, and Corey McClendon. The men say some of the signs were put up by county sheriffs but, in other cases, the county’s sex offenders were told they had to either display the signs on their properties or face unspecified trouble.

The initiative to display the signs began in 2018 when Long directed deputies to place the warnings in the front yards of over 200 sex offenders registered in the county from Oct. 24- Nov. 2. The sheriff’s office planned to do the same this year, which prompted the lawsuit.

In a Facebook post, Sheriff Long said the signs were first instituted after the cancellation of a local Halloween festival, which resulted in an influx of children going door-to-door. He has also explained that the signs comply with a state law that forbids sex offenders from participating in Halloween.

Other areas in the state, like Monroe and Lamar counties, also use the signs. In Monroe County, if an offender did not want a sign in their yard, they had to wait in the lobby of the local sheriff’s office during trick-or-treat hours last Halloween.

Mark Yurachek, the lead attorney for the men who filed the suit, told Fox 5 Atlanta that the Georgia State Sex Offender Registry does not require offenders to post these signs on their homes, therefore offenders should not be forced by local deputies to display them.

“The law allows the sheriff to put a list of registered sex offenders at his office, at the courthouse, on the internet,” he explained. “It does not allow him to go door-to-door telling people you have a sex offender living next door to you.”

“I’m just not sure that this kind of action makes your kids any safer,” Yurachek continued. “It just makes your constitutional rights less safe.” He also went on to call the deputies’ actions clear examples of trespassing, saying, “They’re coming onto their property and putting the signs on there.”

The suit asks for a trial by jury and asks that the jury award the plaintiffs with compensation for damages including economic harm, emotional distress, and the cost of legal fees. The group is also asking that local authorities are prevented from using the sign policy moving forward.

According to Sheriff Long, the case will be heard by a federal court Thursday to see if the signs can be used this year, but regardless of the outcome, he says his office will do everything within the law to protect the community’s children.

See what others are saying: (Fox News) (The Washington Post) (Fox 5)