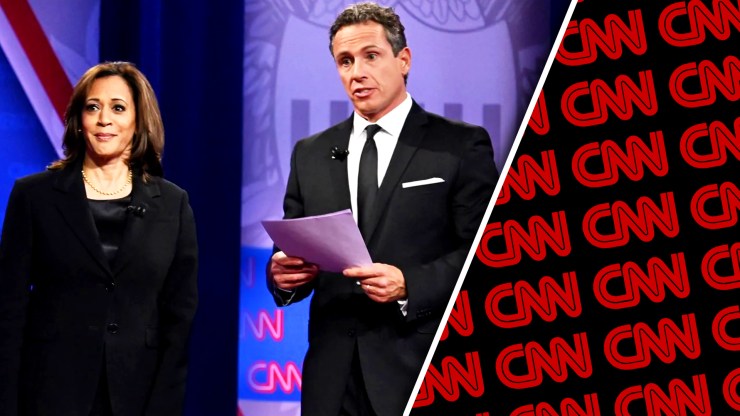 The California senator walked onto the stage to greet Cuomo. “Thank you, guys,” she said to the cheering crowd composed of several LGBTQ members and allies. “And my pronouns are she, her, and hers,” she added.

Her words elicited more cheers from the audience, however, Cuomo’s response was met with harsher criticism online. “She, her, and hers?” he asked before jokingly adding, “Mine too.”

Harris simply replied with “All right.”

Although the senator’s line drew mostly praise, she was also hit with accusations of pandering as she does not typically mention her pronouns at public events. But most of the criticism online honed in on Cuomo.

Within progressive spaces and the LGBTQ community, pronoun introductions are widely viewed as a step towards inclusion and a more nuanced understanding of gender. As most who are familiar with the popular TV host know, “she, her, and hers” are not, in fact, Cuomo’s pronouns.

GLAAD called the moment “disappointing,” while others found it even more inappropriate considering the event, which was organized by CNN and the Human Rights Campaign.

Following the event, Cuomo tweeted out an apology, saying he was “an ally of the LGBT community.”

Some felt the apology wasn’t enough and noted that this incident showed that Cuomo did not understand LGBTQ issues and probably shouldn’t have been a moderator for this event.

Aside from Harris, eight other Democratic 2020 contenders participated in the event. Many released details about their agendas on LGBTQ issues. All nine promised to outlaw discrimination based on sexual orientation or gender identity. They also said they would work to reverse the Trump administration’s ban on transgender people openly serving in the military.

A number of transgender activists also used the night as an opportunity to address violence against black trans women. Many interrupted candidates at several points to call out of lack of representation for their perspectives during the event.

When the mother of a trans son asked former Texas congressman Beto O’Rourke a question, Blossom C. Brown, an actress and producer, walked up to grab the microphone from her.

See what others are saying:(Fox News)  (The Guardian) (The Washington Post)

Fort Worth Officer Resigns After Killing Woman Inside Her Home