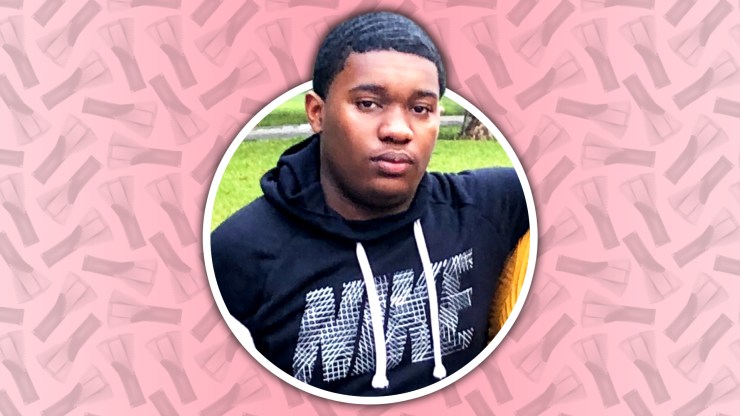 A cellphone video captured in Florida shows a woman shouting racial slurs at a teen who threw a gum wrapper on the ground.

The incident happened Sunday afternoon in St. Petersburg when 14-year-old Barry Henry was with his grandmother and cousin. The teen and his family members stopped by a local FedEx store after church to drop off some documents for his grandmother. When leaving the store, he opened up a stick of gum and tossed the silver wrapper on the ground.

Henry and his family admit that he did litter and acknowledged that it was wrong. In fact, the teen says that his grandmother yelled at him to pick it up.

Henry was on his way to do so when an unidentified woman began shouting at him. The teen’s cousin recorded the interaction which was later posted to Facebook by Henry’s sister Deysha Henry.

“Nuh-uh, don’t even act like that. Pick it up, find it. Get down on your knees and find it,” the woman, who the internet has now dubbed “Pick it up Peggy,” says in the video.

After a few seconds, the teen turns and walks away as the woman repeatedly shouts the n-word.

In the Facebook post, the teen’s sister wrote, “Almost 2020, and we still are dealing with being spoken to in this manner over what exactly? A gum wrapper.”

She later told WFLA 8 On Your Side, “I never in a million years expected this kind of reaction.”

“Yes, he was wrong for dropping a gum wrapper on the ground, but that did not warrant her response,” she continued.

His mother made a similar statement to a local NBC affiliate station explaining that she addressed the littering issue with her son and was upset with him for doing it, however, she was more horrified by the response from the woman.

“He knows better than that and I told him, I talked to him about that. I said, ‘Why did you throw that gum wrapper, why did you do that? It was so small.’ I told him he should have picked up the gum wrapper. You don’t litter! And he said, ‘I didn’t even think about it, mom. I was just walking, and it was just a little silver wrapper. I just threw it down,’” his mother said. “I said to him, ‘Don’t ever litter. You just don’t do that because we want to keep our communities clean.’ He should not have littered. Trust me, he understands that.”

She went on to say that her son was very hurt by the woman’s words and felt “traumatized” by the situation.

Henry has been met with a flood of support from social media users who commended him for remaining calm. St. Petersburg City Council member Steve Kornell shared the video on Facebook and asked for help identifying the teen so that he could find a way to honor him.

“If anyone knows this young man I would love to honor him at this week’s City Council meeting for his extreme politeness towards this woman who did not deserve it at all. It says a great deal about him and about her….”

According to Henry’s sister, Kornell did get in contact with the family. “He called and asked if he could take the boys to the Rays’ playoff game (Monday) but they had school,” the sister told WFLA. “He was completely apologetic about what happened and wanted to thank them for their politeness.”

The teen’s sister has since updated the facebook post to thank the public for their support, but the family wanted to be clear that they are not encouraging anyone to engage in more negative behavior.

“The point of this post is/was to continue to raise awareness regarding inappropriate behavior, and racism in our city, country, and world. Please note that we are not a confrontational family, and we are not looking for vengeance towards this woman, nor are we looking to fight racism, with racism. ❤️🌏”

See what others are saying: (WFLA) (WTSP) (NBC News)