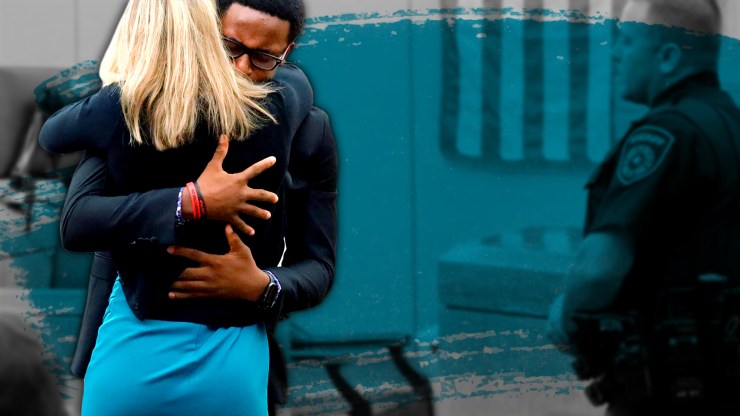 Amber Guyger was convicted of murdering Brandt Jean’s brother, Botham Jean. During her sentencing, he asked to give Guyger a hug, igniting an online debate about the criminal justice system and forgiveness.

Guyger, an ex-Dallas Police Officer, was sentenced on Wednesday to ten years with a possibility of parole after five for killing Botham Jean in 2018. Guyger thought she was entering her own apartment, believing Jean to be an intruder when she shot him. She was actually at the apartment above, which belonged to Jean. He was sitting on his couch eating ice cream at the time.

The maximum sentencing Guyger could have faced was 99 years behind bars, so many thought 10 years was lenient. On Wednesday night, some even protested in downtown Dallas. Brandt Jean, however, said he does not want Guyger to go to jail at all.

“I forgive you,” Botham Jean’s 18-year-old brother said at the sentencing, “and I know if you go to God and ask him, he will forgive you.”

“I personally want the best for you,” he added. “And I wasn’t going to ever say this in front of my family or anyone, but I don’t even want you to go to jail.”

He then requested to hug Guyger, who met him with open arms. Brandt Jean was not the only one to hug her during her sentencing. Judge Tammy Kemp, who oversaw the case, also hugged Guyger and gave her a bible.

These actions of radical sympathy generated a massive online conversation. “Forgiveness” trended on Twitter, and many were impressed by Brandt Jean’s words and actions.

The Dallas Police Department said it showed “a spirit of forgiveness, faith and trust.”

Others Criticize the Moment

There were others, however, who thought that Brandt Jean requesting a hug was okay, but Judge Kemp giving one was more shocking.

“This family is amazing,” reporter Brooke Thomas said about Brandt Jean, before switching topics to the judge. “This part made my jaw drop…None of this has been the ending I expected after a racist killer was convicted and sentenced to prison.”

Thomas also mentioned text messages that prosecutors brought up during Guyger’s sentencing. In the messages, Guyger made a joke about the death of Martin Luther King Jr. and other disrespectful comments about black police officers.

Reporter Jemele Hill said that Brandt Jean can choose to grieve on his terms, but said the judge’s hug was “unacceptable.”

While others thought the whole situation sent a troubling message about the way people of color are treated in comparison to white people.

Activist Deray Mckesson said he would not want his family to “forgive or hug anyone in these circumstances.”

Others questioned if the criminal justice system would have treated Bothman Jean differently if the tables were turned.

See what others are saying: (Dallas Morning Star) (NPR) (NBC Dallas-Fort Worth)