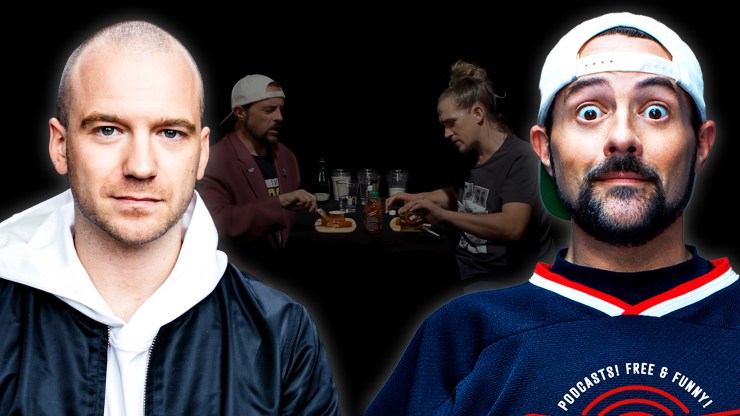 After comedian Kevin Smith made a parody of Hot Ones, tensions between him and the show’s host, Sean Evans heated up to a high Scoville level. Now, however, it looks like the two have made online peace.

On Monday, Smith posted video parodying the hit First We Feast show. His version of the web series was called “Not Ones” and featured him in the hosting role. Jason Mewes, who will appear alongside him in his upcoming film Jay and Silent Bob Reboot, was the interviewee.

The premise of “Not Ones” was that both Smith and Mewes had been rejected from appearing on Hot Ones, leaving them to eat spicy wings on their own show instead.

“You ever see that other show?” Smith asks Mewes. “There’s a show online where they have famous people on it, where they eat hot food and it gets increasingly hotter. And they talk about whatever they’re working on and stuff.”

“I thought with a new movie coming out that we would be able to go on to that show,” he later added. “But our publicist reached out to the other show and they said they weren’t interested.”

Throughout the video, jokes are repeatedly made about them not making it onto Hot Ones, which they refer to as “the other show.” The description of the video and Smith’s tweet promoting it also referenced their rejection.

Fans were shocked to hear that Smith claimed Hot Ones passed on him.

“I love Hot Ones…hearing they turned down Kevin Smith breaks my heart… He would be such a great guest,” another read.

Fans also took their frustrations to Twitter. Many tweeted at Evans to express disappointment that Smith had allegedly been turned down from the show.

The online buzz caught Evans’ attention, prompting him to respond in a video on Twitter. According to Evans, Hot Ones had been working to get Smith on, but the key problem was timing. He said the situation had been “blown up completely out of proportion.”

“For the record, we have never ever passed on Kevin Smith for lack of interest,” he said. “In fact, we had a conversation going with his team that I thought was going really positive.”

He added that making so many episodes keeps the Hot Ones crew busy, so when potential guests call requesting quick turnarounds, it can’t always be done. So, in situations like these, they try to get stars on at a later date.

He then said he found the parody to be funny, but added, “it’s all based on a total lie.”

Smith took to Twitter to address the online chatter himself. He maintained that someone from Hot Ones told him they were “not interested” in having him. He also said, however, that the video was made in fun, and not to send mean-spirited comments Evans’ way.

The top comment of the video furthers that point.

“Folks, this was done in fun. Please don’t get sh*tty at Hot Ones over this,” Smith wrote. “This has been my favorite #JayAndSilentBobReboot promo thus far and it never would’ve happened under any other circumstance. NOT ONES is not meant to incite revolt, it’s meant to remind you that if no band will have you, simply start your own band with your friends!”

Smith also uploaded a walk-and-talk style video to drive his point home, where he further explained the scheduling situation between him and Hot Ones.

“I understand my team was trying to work out a schedule. Your team said 2020,” Smith said. “That’s wonderful, that’s fantastic, but so we shot our little video anyways for fun. But that wasn’t about you, there it is.”

Evans took his apology to heart and said he got a “good laugh” out of “Not Ones.”

The two now seem to be on much better terms, because when someone suggested they make an episode of “Pot Ones” that involves them getting “progressively higher during the interview,” both expressed excited interest.

See what others are saying: (Vice) (Comicbook.com)