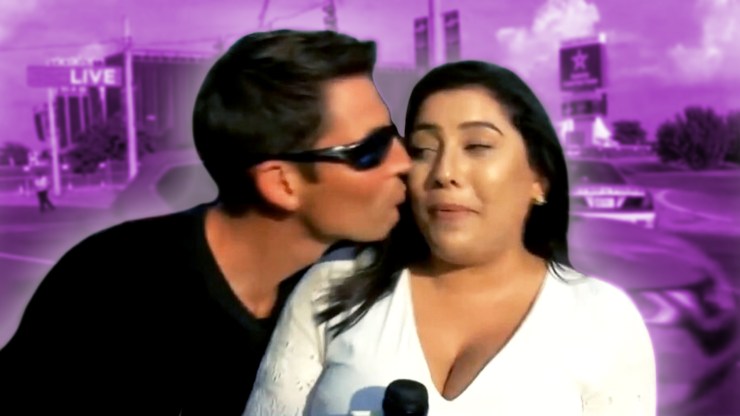 A man who forcibly kissed a female reporter during a live broadcast last week has been identified and charged.

WAVE 3 News reporter Sara Rivest was reporting live outside the Bourbon & Beyond festival in Louisville, Kentucky when a man she did not know stood behind her and made spanking motions before forcibly kissing her on the cheek and running away.

“Okay, that was not appropriate,” Rivest said to the camera following the interaction. “Let’s just go to the story.”

Louisville Metro Police later identified the man as Eric Goodman and charged him Thursday with harassment with physical contact. He is scheduled to appear in court on Nov. 6.

Rivest later posted a clip of the incident on Twitter.

“Hey mister, here’s your 3 seconds of fame. How about you not touch me? Thanks!!” she wrote.

Rivest’s post picked up a lot of attention, prompting WAVE 3 News to address the event in an on-air conversation with anchor Dawne Gee.

Rivest said she was sure the man thought what he did was harmless and in fun, but that she did not feel the same way.

“My nervous laughter does not equate to approval of his actions,” she said.“It was an exertion of power over me, a woman trying to do her job who couldn’t stop him. This embarrassed me, and it made me feel uncomfortable and powerless.”

“I think it’s important to tell people who don’t know what a violation and all too common occurrence this is,” Rivest added. “Journalists in the field, especially women, again just trying to do their jobs, experience harassment like this all of the time, and it is not okay.”

She continued to say that she knows she was in a public place, and that he had the same right to be there, but added, “when you put your hands on me or on anyone else without their approval, that is wrong.”

Goodman has since written Rivest an apology letter for the incident, WAVE 3 News reported, including a screenshot of the note.

In the letter, Goodman wrote that he made a bad decision and that he was just trying to be funny, but now he sees why it was wrong.

“After watching the video, reading through the posts and listening to your explanation, I have found a new respect for how difficult it must to be a reporter,” he wrote.

“I was wrong to interrupt your job, invade your personal space and leave you feeling powerless,” he continued. “I sincerely apologize and deeply regret my actions where I allowed immaturity to humiliate you, myself, and many others.”

During a WAVE 3 News broadcast Thursday, Rivest said, “I absolutely accept Eric’s apology, I truly believe he feels bad and is sincere.”

“But his actions, they do have consequences, and from that letter it seems like he also believes he needs to face those consequences,” she continued. “So I also agree with the commonwealth’s decision in this case.”

See what others are saying: (WAVE 3 News) (USA Today) (Courier-Journal)