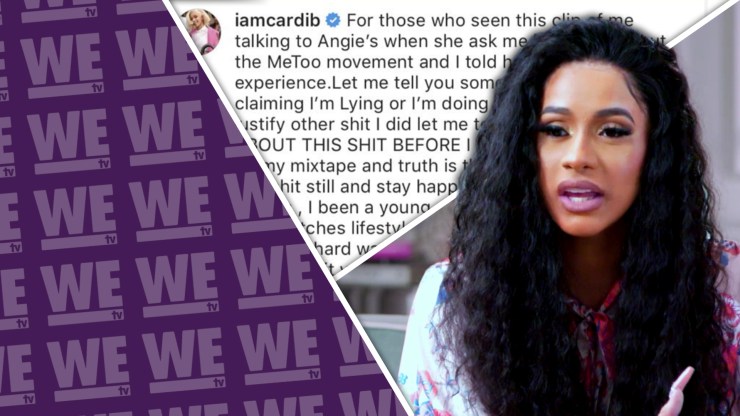 Cardi B blasted people on Instagram Live Wednesday who accused her of lying about being sexually harassed by a photographer during a magazine photoshoot.

“When is there going to be a #MeToo movement in the urban world, where this shit really be happening?” she said. “And then you got these dusty, crusty fuck ass bitches on the comments like, ‘Oh, she’s lying.’ Bitch, lie about what? Lie about what? What I got to lie for? N****s really try to take advantage of girls.”

Cardi B defended her claim by saying she was not looking for sympathy. The rapper continued, saying that female strippers and Instagram models have experienced similar instances of sexual harassment. Additionally, she highlights similar issues pertaining to young women “in the hood.”

“N****s will go to [the] stripclub hit you up on the internet and try to finesse you out your pussy if you don’t have the proper representation for a dream they sell,” she also said in an Instagram comment. “I be saying this shit cause there’s ma young girls that have the young mentality I had…”

Alluding to her own experiences, she details how she’s seen men take advantage of women, first asking for pictures then promising favors like photoshoots in return for other sexually explicit acts.

In the pilot episode of WE TV’s Untold Stories of Hip Hop, the rapper opened up about her harassment claims.

“I will never forget how I went to shoot for this one magazine,” she said to host Angie Martinez, “and the photographer, he was just trying to get close to me. Like, ‘Yeah, you want to get in this motherfucking magazine?’ Then, he pulled his dick out. I was so fucking mad, and it’s just, like, ‘This is crazy.’”

“I was like, ‘You’re fucking bugging,’” she continued, saying she left the shoot and told the magazine owner about the situation.

She goes on to say the owner was apathetic to her complaint, replying with comments like “So…? And..?”

“When I see the Me Too movement, there’s girls from the hood, I know that they went through the same type of treatment,” she said.

When asked if she still experiences that kind of harassment, Cardi B said, “Oh, hell no, I put you on blast on my Instagram Live. I hope the fuck you would.”

Cardi B previously opened up about that incident to Cosmopolitan last year, telling the magazine, “I bet if one of these women stands up and talks about it, people are going to say, ‘So what? You’re a ho. It don’t matter.’”

See what others are saying: (People) (Yahoo) (NBC News)

Sony and Marvel Strike Deal for One More Spider-Man Film