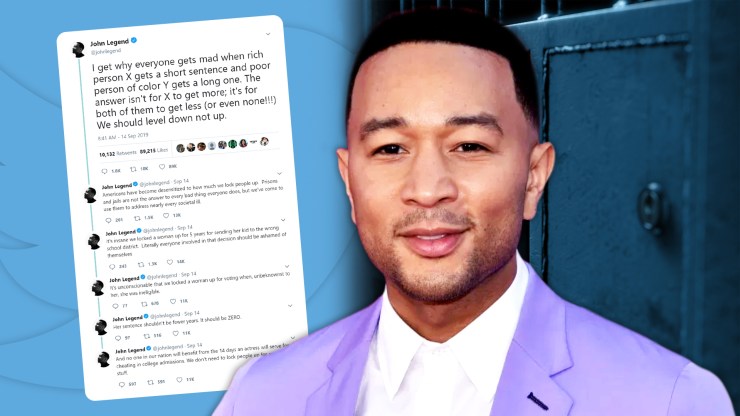 Musician John Legend responded to criticisms of Felicity Huffman’s sentencing for her role in the sweeping college admissions scandal, arguing that “no one in our nation will benefit” from her serving prison time.

On Friday, Huffman was sentenced to 14 days in prison along with one year supervised release, 250 hours community service, and a fine of $30,000. Huffman paid $15,000 to have her daughter’s SAT score boosted and pled guilty to guilty to one count of conspiracy to commit mail fraud and honest services mail fraud.

Many thought that just 14 days behind bars was lenient and compared Huffman’s case to those of black women who were given more time for crimes they considered similar or even less severe.

One case many turned to was that of Tanya McDowell, a Connecticut woman who was sentenced to five years in prison for lying about her address to get her son into a better school district. At the time, she was homeless and living out of her van, shelters, and an apartment she only had access to at night.

Others pointed to a similar case with Kelley Williams-Bolar in Ohio. She used her father’s address to get her children into a better school district and was handed two concurrent five-year sentences that she was later able to reduce to 10 days. Williams-Bolar’s case was cited in Huffman’s sentencing. Prosecutors argued that if someone in her situation served time, there’s no reason that Huffman, who comes from a more privileged background, should not do the same.

Critics of Huffman’s sentence argued that there were similarities between what Huffman did and what these two mothers did, as they all had the goal of getting their child a better education.

Another case people compared it to was that of Crystal Mason. Mason was handed a five-year sentence after unknowingly voting illegally. She tried to fill out a provisional ballot in 2016, and at the time she was on supervised release for a federal felony. Mason was unaware that she could not vote until her release was over and was convicted of illegal voting.

She is currently repealing her sentence and gave a statement to the Huffington Post regarding Huffman’s time.

“I don’t wish this for anyone, but a sentence to 14 days for actual serious fraud just shows how unfair my sentence is,” she told them. “I’m hopeful the Justices will see that under the law, I shouldn’t have been convicted in the first place.”

Musician and criminal justice reform advocate John Legend responded to these varied reactions without ever mentioning Huffman’s name. Instead of arguing that Huffman’s sentence was too light, he said people like her and the others mentioned should serve no time at all.

He mentioned cases like McDowell and Mason and called them “insane” and “unconscionable.”

“We don’t need to lock people up for any of this stuff,” Legend concluded in his thread.

On Sunday, he furthered his argument by suggesting that there are other ways people can be held accountable for their actions.

Legend was not alone in believing prison time was not the answer. The executive director of the Ohio Justice and Policy Center, David Singleton, who represented Williams-Bolar told the New York Times that putting the actress behind bars is not productive.

“When you are rich — and particularly if you’re rich and white in this country — there’s a different justice system,” he said. “Sending Felicity Huffman to jail is not going to solve that problem.”

Twitter users began to share what they found to be more productive ways for people like Huffman to right their wrongs. Some suggested she pay for the tuitions of McDowell’s children or contribute to scholarships.

See what others are saying: (Huffington Post) (USA Today) (The Atlantic)

SNL Drops Comedian Shane Gillis After Use of Slurs Resurface