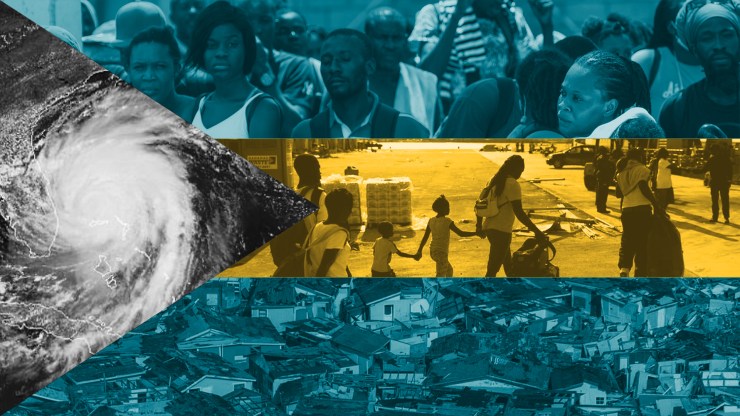 Refugees Turned Away By Ferry Operator

The United Nations has estimated that around 76,000 people in the Bahamas have been left homeless just over a week after Dorian tore through the country.

Now, thousands and thousands of people are being evacuated to the U.S., as well as islands in the Bahamas that were not hit as hard by Dorian.

The confusion over evacuee restrictions first started on Sunday when more than 100 people seeking humanitarian refuge in the U.S. were ordered off a ferry that was carrying people from the Bahamas to Florida.

In a video of the incident, a crew member on the Balearia Caribbean cruise ship can be heard telling all passengers who did not have U.S. visas to get off the boat.

Under a standing CBP rule, Bahamian citizens traveling to the U.S. who have a passport, police certification, and no criminal record can enter the U.S. without a visa as long as they are pre-cleared to leave from two specific airports in the Bahamas.

Reporter Brian Entin said in a tweet that Balearia Caribbean crew members had explicitly told him they were directed to extend that rule to the people on the boat.

“They say they were told it was ok to accept Bahamian evacuees with passport and copy of police record,” Entin wrote. “They boarded boat. Then when they sent manifest to US Customs and Border Patrol — they were told those without visas would not be accepted.”

On Monday, Balearia Caribbean also pinned the blame on the CBP in a statement to the Miami Herald.

“We boarded these passengers with the understanding that they could travel to the United States without visas, only to later having been advised that in order to travel to Ft. Lauderdale they required prior in-person authorization from the immigration authorities in Nassau,” the statement said.

However, CBP officials denied that claim saying it was the ferry operators that made the decision and not them.

“Their decision to make all those people get off board had nothing to do with CBP,” a CBP spokesperson told the Herald. “The company knew the U.S. would have welcomed all of them even if they didn’t have the documentation.”

“The ferry would have just had to just wait at Port Everglades for about 12 hours for every passenger to be processed and that didn’t make good business sense for them,” the spokesperson added. “So they shifted the blame on CBP.”

On Monday, acting head of the CBP Mark Morgan also attempted to clear up the incident in a White House briefing.

“We are not working and telling a cruise line that you cannot allow anyone without documents, that’s just not being done,” Morgan said. “We will accept anyone on humanitarian reasons that needs to come here, we’re going to process them expeditedly.”

A few hours after that briefing, President Trump contradicted Morgan’s statement and told reporters that refugees from the Bahamas did need documents.

“We have to be very careful. Everybody needs totally proper documentation,” the president said.

“The Bahamas had some tremendous problems with people going to the Bahamas that weren’t supposed to be there.”

Just hours after Morgan indicated that the U.S. was loosening visa restrictions, Trump seemed to say the U.S. will tighten the same restrictions.

In that statement, the agency essentially reiterated the CBP rule that people from the Bahamas can apply to enter the U.S. without a visa from two specific airports as long as they meet the stated requirements.

However, the statement also added that: “Bahamians arriving to the United States by vessel must be in possession of a valid passport AND valid travel visa.”

See what others are saying: (NPR) (The Washington Post) (Miami Herald)

9/11 First Responders Expose the Truth & Tragedy Behind the Aftermath