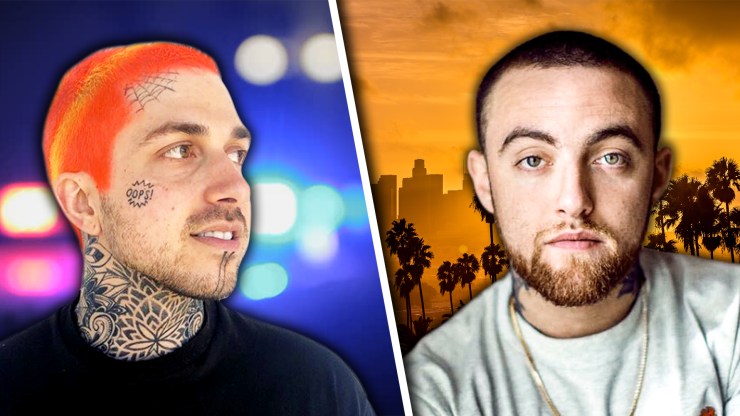 Prosecutors arrested and charged a 28-year-old Los Angeles man on Wednesday in connection with the death of Mac Miller, the musician who died of a drug overdose last year.

According to a 42-page criminal complaint filed in the Central District of California, Miller, whose real name is Malcolm James McCormick, texted Cameron James Pettit asking for Percocet, a prescribed painkiller that contains oxycodone.

Pettit agreed to bring him oxycodone pills, cocaine, and Xanax, which he delivered to Miller’s studio on Sept. 5. However, according to prosecutors, Pettit sold Miller counterfeit oxycodone pills containing fentanyl – a synthetic opioid that the CDC says is 50 times more potent than heroin.

Miller was found unresponsive in his Studio City home on Sept. 7, 2018. His death was later determined to be an accident caused by a combination of fentanyl, cocaine, and alcohol, according to the LA County Coroner’s office.

It’s unclear if Pettit knew that the drugs were counterfeit, however, the complaint says he supplied the artist with drugs for several months.

Pettit has been charged with one count of distributing a controlled substance and is facing 20 years in federal prison.

“We are aggressively targeting drug dealers responsible for trafficking illicit fentanyl, which has become the most deadly facet of the opioid epidemic,” U.S. Attorney Nick Hanna said in a statement.

“We are committed to slowing the number of overdose deaths and prosecuting those responsible for spreading this most dangerous opioid,” he added.

“Fentanyl disguised as a genuine pharmaceutical is a killer — which is being proven every day in America. Drugs laced with cheap and potent fentanyl are increasingly common, and we owe it to the victims and their families to aggressively target the drug dealers that cause these overdose deaths.”

No Bond For Pettit

The court documents also contained Instagram direct messages Pettit allegedly sent to his friends after Miller’s death. In one where a friend asked how he was doing, he allegedly responded with, “I am not great…Most likely I will die in jail.”

“Nothing has happened yet.” he wrote in another, “But it might.”

“I think I should probably not post anything…just to be smart.”

Pettit was ordered to be held without bond pending trial after prosecutors told the judge he was a danger to society and a flight risk.

When making the decision, U.S. Magistrate Judge Maria Audero cited messages that suggested Pettit may leave the country, as well as the seizure of empty pill capsules, a ledger, and narcotics at his home, according to the Los Angeles Times.

His arraignment is set for Oct. 11.

Others Allegedly Involved Not Charged

Thom Mrozek, of the US Attorney’s Office, told reporters on Wednesday that the investigation into Miller’s death is still ongoing. He also said there are two other people who were allegedly responsible for supplying Miller with drugs that have not been charged.

“As of right now, he faces one federal charge of distribution of controlled substances,” he said.

“We’ll see how the investigation continues.”