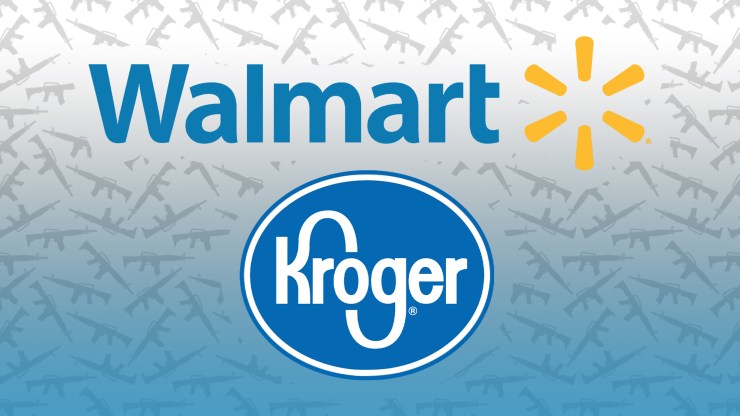 Both Walmart and Kroger are asking customers to not open-carry guns in their stores.

On Tuesday, Walmart President and CEO Doug McMillon published a memo written to the company’s associates. The letter addressed the mass shootings that have happened around the country and in its stores in recent weeks.

“A month ago, in El Paso, Texas, a gunman with an assault-style rifle launched a hate-filled attack in our store, shooting 48 people resulting in the loss of 22 innocent lives,” he said. “Just a few days prior, two of our associates were killed by another associate in our store in Southaven, Mississippi. And hours after the shooting in El Paso, our country experienced another mass shooting in Dayton, Ohio. This weekend brought tragedy to Midland and Odessa, Texas.”

“It’s clear to us that the status quo is unacceptable,” McMillon added.

He then announced new changes to the store’s policy on selling guns and ammunition. He said that sales of short-barrel rifle ammunition like .223 caliber and 5.56 caliber that be used in large capacity clips on military-style weapons will be discontinued, as well as sales of handgun ammunition. Handgun sales in Alaska will also be discontinued, which marks the company’s full exit from handguns.

“We know these decisions will inconvenience some of our customers, and we hope they will understand,” McMillon stated. “As a company, we experienced two horrific events in one week, and we will never be the same.”

McMillon also outlined incidents following the shooting in El Paso where shoppers walked into Walmart stores openly carrying a weapon, sometimes with an intent to cause fear, and other times causing fear unintentionally.

“These incidents are concerning and we would like to avoid them,” he said. “So we are respectfully requesting that customers no longer openly carry firearms into our stores or Sam’s Clubs in states where ‘open carry’ is permitted – unless they are authorized law enforcement officers.”

Towards the end of the memo, McMillon, who said he himself is a gun owner, called upon Congress to take legislative action.

“Move forward and strengthen background checks and to remove weapons from those who have been determined to pose an imminent danger,” he wrote. “We do not sell military-style rifles, and we believe the reauthorization of the Assault Weapons ban should be debated to determine its effectiveness. We must also do more, as a country, to understand the root causes that lead to this type of violent behavior.”

Later on Tuesday, Kroger followed Walmart’s lead and released a statement to CNBC asking that customers no longer openly carry firearms in their stores.

“We are also joining those encouraging our elected leaders to pass laws that will strengthen background checks and remove weapons from those who have been found to pose a risk for violence,” their statement added.

Several politicians spoke out in support of the two companies. Former Ohio Governor John Kasich commended them, as well as Dick’s Sporting Goods, who has previously tightened gun measures, for “taking a leadership role on this critical issue.”

Rep. Adam Schiff (D-CA) also said decisions like this “can have an enormous impact on public safety.”

Former Texas Rep. and presidential candidate Beto O’Rourke called it a “step in the right direction,” before adding legislative measures he believes should follow.

However, Walmart’s choice did face criticism from others. The National Rifle Association released a statement calling the move “shameful” and said the company succumbed “to the pressure of the anti-gun elites.”

Dana Loesch, a former spokeswoman for the NRA and current radio host, condemned the certain kinds of ammunition Walmart chose to discontinue.

Fox News personality Tomi Lahren said this choice would cost the retailer customers and added that the company had “just shot itself in the foot.”

See what others are saying: (CNBC) (NPR) (Wall Street Journal)

Magic Mushrooms, Mental Health, & The 2020 Elections: Why States May Vote on Psilocybin Soon…