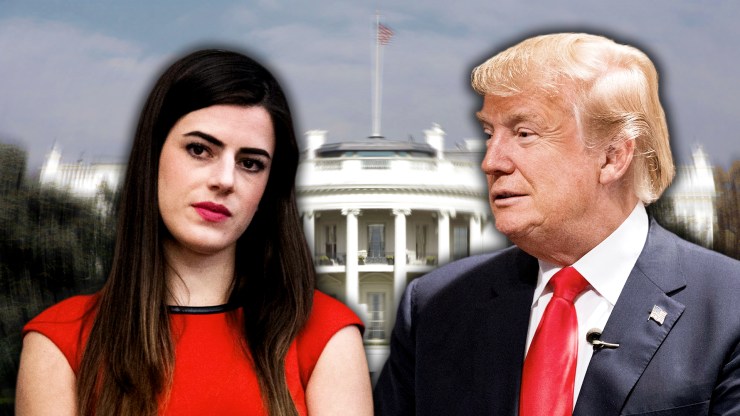 President Donald Trump’s personal assistant, Madeleine Westerhout, abruptly resigned Thursday after the president allegedly learned she had shared details about his family during an off-the-record conversation with journalists.

The 29-year-old, who had worked for Trump since he assumed office, also reportedly shared details of Oval Office operations during that same conversation. Both incidents allegedly occurred earlier this month during a dinner in Berkeley Heights, New Jersey, while Trump visited his Bedminster club as part of a working vacation.

According to CBS News, at the dinner, Westerhout also gossiped about broadcast journalists who were seeking to sit down with the president.

As Trump’s personal assistant, her office was situated directly in front of the Oval Office in the West Wing, with many media outlets dubbing her a “gatekeeper” to the president. During a farewell event for Sarah Sanders, the Trump Administration’s former press secretary, sources said Westerhout bragged about her role as a gatekeeper.

Westerhout previously worked on Mitt Romney’s 2012 presidential campaign, having taken off the fall semester of her senior year at the College of Charleston to work as an intern.

She is also a former Republican National Committee assistant to Kate Walsh. Walsh later served on Trump’s transition team and accepted the role of White House Deputy Chief of Staff before resigning after two months.

At first, Westerhout was reportedly not in favor of a Trump administration, with Tim Alberta of Politico writing in his book American Carnage that she was so upset on election night in 2016, she cried. It also states Trump had reservations about Westerhout working as part of his staff. Because of this, some White House officials also feared she would be disloyal to the president.

“She was a spy from day one who sought to use her proximity to the president to curry favor with his detractors,” a former White House official said of her.

A different former White House official rebuked comments about her intentions, saying she had been singled out by long-term members of Trump’s team for her past with the RNC. The same official also denied reports that she cried on election night.

Yet another former official compared her resignation to a “mob hit,” claiming Alberta’s book stoked questions about her loyalty to the president.

During Trump’s transition, she gained traction from the media for her role in escorting potential administration officials and even Leonardo DiCaprio through Trump Tower.

“The President-elect wanted to make sure all of his meetings were very transparent, so it became a little bit more public than I originally thought it was going to be,” she told CNN in 2016.

Later in her role, she reportedly enjoyed her access to the president, sharing photos of herself at rallies on her private Instagram account or joking that she printed a piece of paper Trump held up during a speech. Trump, in turn, has often called her “my beauty.”

Politico reported that Westerhout, this year, had been working to expand her job to include aspects like foreign travel. One White House staffer claimed she had been acting like a de facto chief of staff and described her recent dinner with reporters in Bedminster as the “final straw.”

While writing Fire and Fury, journalist Bob Woodward reached out to interview Trump several times but never received the opportunity. Later, speaking with the president, Trump asked him, “Did you speak to Madeleine?”

Woodward then indicated he had not, to which Trump said, “Madeleine is the key. She’s the secret.”

In 2018, Westerhout was found to have violated the Hatch Act, along with deputy press secretary Raj Shah, deputy director of communications Jessica Ditto, and three other White House officials.

The violation came from the Office of the Special Counsel to Citizens for Responsibility and Ethics in Washington and found that four of the six staffers — including Westerhout — either tweeted “#MAGA” or “Make America Great Again!”

The OSC argued that since she and others used the political slogan of Trump in his re-election campaign for 2020, they had violated the act to keep federal employees politically neutral in their jobs.

No action was taken against Westerhout or the five other staffers.

See what others are saying: (BBC) (CNN) (Fox News)