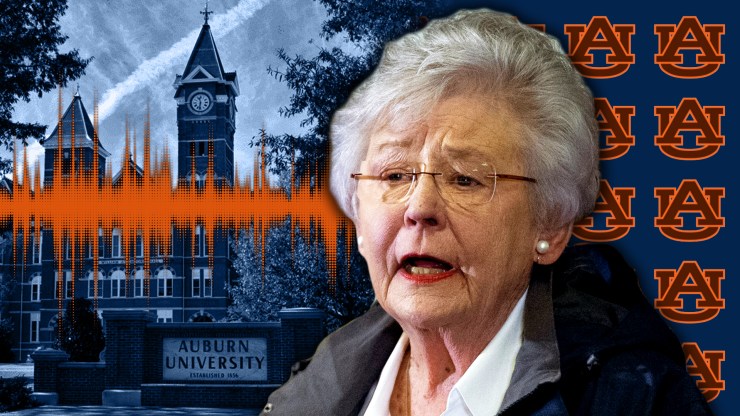 Alabama Gov. Kay Ivey apologized for wearing blackface during a college sketch at her alma mater Auburn University over 50 years ago.

“As I look at my fiance across the room, I can see her that night,” LaRavia said as he described the bit. “She had on a pair of blue coveralls and she had put some black paint all over her face.”

LaRavia said the bit involved people crawling on the floor looking for “cigar butts,” which was the title of the skit. He claimed the crowd got a “big reaction” out of it.

“That was just my role for the evening,” Ivey, who was Auburn’s student body Vice President at the time, added.

Ivey claims to have no memory of both the sketch and the radio interview that followed, but said she “will not deny what is the obvious.”

“As such, I fully acknowledge – with genuine remorse – my participation in a skit like that back when I was a senior in college,” she said in a statement. “While some may attempt to excuse this as acceptable behavior for a college student during the mid-1960s, that is not who I am today, and it is not what my Administration represents all these years later.”

“I offer my heartfelt apologies for the pain and embarrassment this causes, and I will do all I can – going forward – to help show the nation that the Alabama of today is a far cry from the Alabama of the 1960s,” she added. “We have come a long way, for sure, but we still have a long way to go.”

Rep. Terri Sewell (D-AL) called the governor’s participation in blackface “reprehensible” and “offensive.” She also added that her apology should be met with action.

“If she did that she is insensitive,” he said, according to AL.com. “It is not acceptable any time or place. Do us a favor and step down.”

“It may have been 52 years ago when the skit happened, but it apparently still shapes who she is today,” the organization’s president Benard Simelton said in a statement to the news outlet. “She refused to meet with the NAACP two years ago to discuss race relations in Alabama.”

Ivey says she has no plans to resign. The state’s GOP is supporting her and accepting her apology. Chairman Terry Lathan released a statement saying the party supports the governor taking ownership of her actions.

“While it occurred when she was a college student, Governor Ivey has stood up, admitted her mistake and offered a sincere apology though she has no recollection of the event,” Lathan wrote. “Her extraordinary record of public service shows her ability to work with all people regardless of race, religion or party affiliation. We stand with Governor Ivey uniting our state for a greater future.”

Photos from events held by Alpha Gamma Delta, the sorority Ivey was president of when she attended Auburn in the ’60s, surfaced earlier this year. Some photos did show students wearing blackface, however, reports say those photos do not depict Ivey.

College Board Drops Plans for SAT “Adversity Score” After Criticism