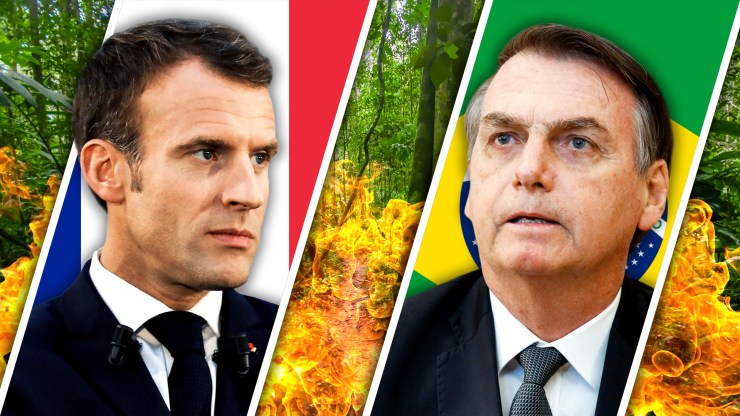 Brazilian President Jair Bolsonaro accused French President Emmanual Macron of evoking a “misplaced colonialist mindset” after Macron suggested that the Amazon rainforest fires be discussed at the G7 summit in his home country.

“Our house is burning. Literally,” Macron tweeted on Thursday.

“It is an international crisis. Members of the G7 Summit, let’s discuss this emergency first order in two days,” he added. The G7 Summit will be held in Biarritz, France starting Saturday. World leaders from the other G7 countries, Canada, Germany, Italy, the U.K., Japan, and the U.S will be attending.

“The French President’s suggestion that Amazonian issues be discussed at the G7 without the participation of the countries of the region evokes a misplaced colonialist mindset in the 21st century,” Bolsonaro added.

Impacts and Potential Causes of the Fires

According to Brazil’s National Institute for Space Research, this year, Brazil has seen an 84% increase in fires in the Amazon. Reports say there are currently 2,500 active fires in the forest, which provides 20% of the world’s oxygen supply. While fires are common this time of year, this increase worries environmental activists.

Since news of the fires started receiving international attention, Bolsonaro has been criticized for inaction. Many believe that deforestation tactics, which he has been supportive of, are the causes of the issue. Bolsonarao, however, has said that he suspects nongovernmental organizations are behind the fires in efforts to make his government look bad. There is currently no evidence to support this.

World leaders have expressed their concerns over their fires and the impacts they could have. Canadian Prime Minister Justin Trudeau shared his support of Macron’s initiative to prioritize the rainforest at the G7 Summit.

A spokesperson for German Chancellor Angela Merkel, a fellow G7 leader, said that the subject “belongs on the agenda.”

“The extent of the fires in the Amazon area is shocking and threatening, not only for Brazil and the other affected countries, but also for the whole world,” the spokesperson said in a statement to reporters.

What You Can Do

There are organizations working to save the Amazon. The Amazon Conservation Team works with indigenous communities to protect the forest and their culture. Rainforest Trust aims to stop deforestation. The Amazon Conservation Association helps to prevent fires and minimize their reach. Donating to these groups, or seeing if there are any ways you can volunteer within them, is one way to help the situation from wherever you live.

For other everyday things you can do to help, the Rainforest Alliance also has lists of green products and lifestyle habits that you can follow. They also work with local communities and organizations to help fight deforestation.

See what others are saying: (BBC) (Aljazeera) (NPR)