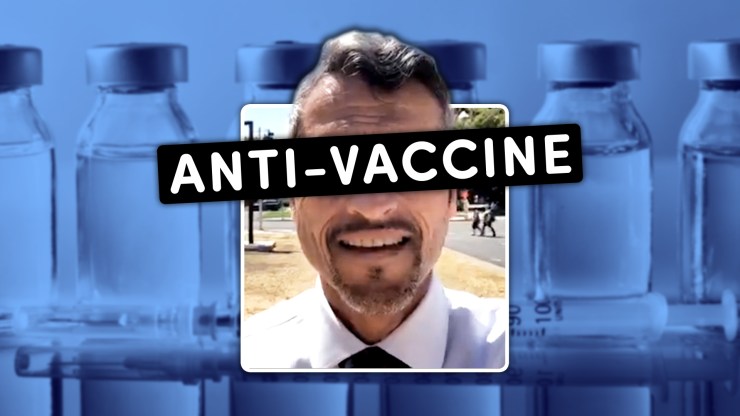 According to the Los Angeles Times, Kenneth Austin Bennett was cited with suspicion of assault on Wednesday. Bennett live-streamed the incident on his Facebook page, where he frequently posts anti-vax rhetoric along with other conspiracy theories to his 4,500 followers.

Bennett’s video opens with him walking around Sacramento near the California State Capitol. He talks to his followers about religion, conspiracy theories, and “Lucifer establishing his kingdom” in Sacramento for the first nine minutes of the video. He then runs into Pan.

Bennett then follows Pan down the street and asks him about remarks he made in 2015 about water being the most dangerous ingredient in vaccines. He continues to press the senator on other vaccine-related topics, to which Pan minimally responds. Eventually, Pan laughs and says, “Oh boy” after Bennett asks him a question about water being a toxin.

He walks away from the scene and says, “I probably should not have done that.” He returns to Pan, who appears to be calling the police with his colleagues. They eventually walk into a building, and Bennett continues to address his camera outside.

He claims he pushed the senator for “lying” about vaccine information.

“If he got what he deserved he would be hanging for treason,” he later says about Pan.

Bennett acknowledged the situation on his Facebook page during a second live stream on Wednesday. In the hour-long stream, he further condemned Sen. Pan, and also spoke on other conspiracy theories about Facebook and the 2018 wildfires in Paradise, California.

“I was charged with assaulting Richard Pan, but also had the chance to further expose the corrupt politician,” he captioned the video.

He also told local news outlet KCRA that he did not regret pushing Pan.

In a statement on Thursday, Pan said the incident was a result of rhetoric spread by anti-vaccine extremists.

“Bullying, threats, and violence should not be acceptable in civil discourse and policy making,” he said. “Yesterday’s assault was incited by violent rhetoric and imagery employed by anti-vaccine extremists.  Anti-vaxxers have attempted to dehumanize me and other public health advocates on social media while making death threats.”

“Mr. Bennett is not a lone actor, but a person who accepted the violent rhetoric of the anti-vax movement and acted upon it by assaulting me on a public street while live streaming the attack on Facebook,” Pan added. “Social media companies also need to accept responsibility for giving a platform for this violence and hate.”

Others also supported Pan, including California Senate President pro Tempore Toni G. Atkins, who said that disagreeing on legislation is “no reason to resort to aggressive and harmful behavior.”

“My colleagues and I will do all we can to aid those investigating this matter and protect the elected leaders, staff, and visitors who work at and tour our Capitol each day,” she added in a statement.

History Between Bennett and Pan

Sen. Pan was a pediatrician prior to becoming a state lawmaker. He authored a bill that passed in 2015 that removed religious and personal beliefs as exemptions for school children receiving vaccines. He is currently working on legislation that aims to combat illegitimate medical exemptions.

In 2018, Bennett ran to unseat him as the senator for California’s sixth district. He was unable to appear on the ballot and ran as a write-in.

On his campaigns website, he claimed that the bills Pan had worked on were “reckless and destructive to our children’s future.”

He also said one of his campaign promises was to “protect children from forced vaccinations.”

See what others are saying: (Los Angeles Times) (KCRA) (The Daily Beast)