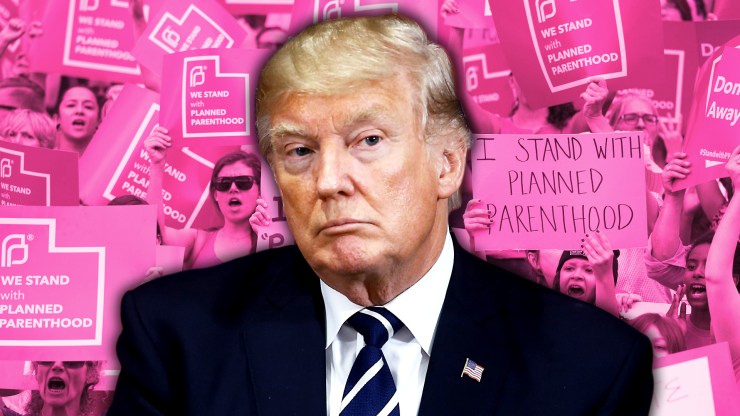 Planned Parenthood announced Monday that it is bowing out of federal funding under Title X after a new rule would prevent it from referring patients to abortion services.

Planned Parenthood is the largest provider under Title X funding. Since it was enacted in 1970, Title X has given family planning and related healthcare services to low-income patients, many of whom are women. It serves 4 million people annually, with close to 40 percent of its patients being served by Planned Parenthood.

The rule, penned by the Trump Administration, says that Title X providers cannot refer patients to doctors or practices that provide abortions, but makes an exception for cases of medical emergencies. It also allows for patients to receive other information on abortion. It goes on to say that a Title X provider can provide a patient with a list of providers “including some (but not the majority) who perform abortion as part of a comprehensive healthcare practice.”

Planned Parenthood called the rule “unethical and dangerous” in a statement on Monday.

“Our patients come to us because they expect the best information and health care available. And we have a commitment to provide that to them,” Acting President Alexis McGill Johnson said. “But the gag rule would make it impossible for us to uphold that commitment. At Planned Parenthood, we refuse to cower to the Trump-Pence administration. We will not be bullied into withholding abortion information from our patients. Our patients deserve to make their own health care decisions, not to be forced to have Donald Trump or Mike Pence make those decisions for them.”

Planned Parenthood said they will remain open without Title X funding and will continue to operate with funds from other sources. The organization received $60 million annually from Title X and was the only Title X provider in some states. Reports say this could result in longer lines and higher out-of-pocket payments for many patients.

Planned Parenthood is not the only organization refusing Title X funds because of this rule. Both Maine Family Planning and the Vermont Department of Health have announced their exit from the program.

“Maine Family Planning withdraws from the Title X program—more in sorrow than in anger–because the Domestic Gag Rule, which the Office of Population Affairs is responsible for implementing, would fundamentally compromise the relationship our patients have with us as trusted providers of this most personal and private health care,” Maine Family Planning said in a statement. “It is simply wrong to deny patients accurate information about and access to abortion care.”

Maryland, Washington, Hawaii, Oregon, Illinois, and New York have also indicated that programs in their state might refuse funding as well.

Despite the dissent, the Trump Administration thinks the rule is beneficial. The White House said President Donald Trump was pleased with the rule in a statement published in May, when it was proposed.

“This important proposal would ensure compliance with the program’s existing statutory prohibition on funding programs in which abortion is a method of family planning,” the statement read. “The new proposed rule would not cut funds from the Title X program. Instead, it would ensure that taxpayers do not indirectly fund abortions.”

These Title X changes could see some hurdles, however. Planned Parenthood and the American Medical Association have filed suits to block the rule. In July, district courts took their side, but the 9th Circuit Court of Appeals allowed it to go into effect. The case is still ongoing and an oral argument in the 9th circuit court is scheduled for September 23.

The House of Representatives also passed a spending bill with language that would block the rule, moving the situation to the hands of the Senate.