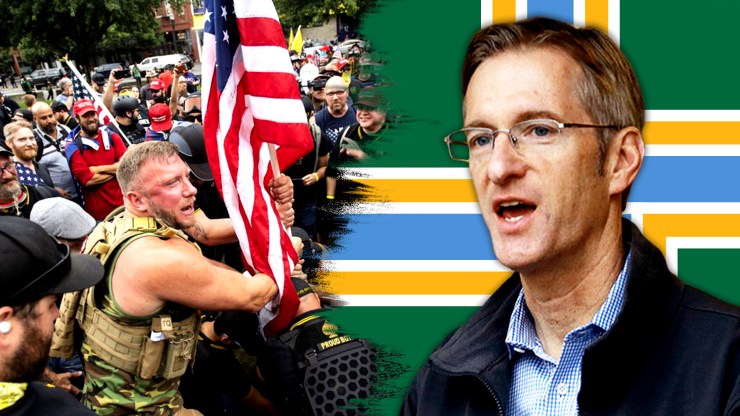 Portland’s Mayor is saying the city avoided the worst-case scenario after protests led by the Proud Boys were met with counterprotests from Antifa.

On Saturday the Proud Boys, a male-only right-wing group that considers themselves to be patriots and western chauvinists, and has been listed as a hate group by the Southern Poverty Law Center, planned a march in an area of the city’s downtown. Other right-wing groups like Patriotic Prayer also turned out, but they were met by a counterprotest led by Antifa.

Antifa, or anti-Fascists, is a left-wing group who mainly protests far-right groups and leaders that they perceive as fascist or bigoted, led a clashing demonstration. Due to both groups’ opposing views and reputations for inciting violence, the Portland Police Bureau and other city officials feared that the events could cause safety concerns and public disruption.

“PPB and our partners are here to protect everyone’s safety while facilitating everyone’s 1st Amendment right to gather and speak,” Portland Police said in a statement.

The demonstrations ended up lasting over six hours until officers declared a civil disturbance. An estimated 1,200 people turned out. Portland Mayor Ted Wheeler believes that considering the size and nature of the event, police and the city handled the situation well.

“Based on the information that we’d been receiving over the last several weeks, we were preparing for and planning for a worst-case scenario, and I’m very pleased that at least so far this did not happen,” he said during a press conference.

Still, the day did not go without any issues or infractions. According to police, 13 arrests were made for reasons including disorderly conduct, attempted assault, unlawful use of a weapon, resisting arrests, and possession of a weapon in a park. Officers seized several weapons and said six people were injured with one going to the hospital. Most injuries, however, were minor.

Both the Proud Boys and Antifa walked away from the demonstrations seeing their side as victorious. Joe Biggs, who planned the rally for the Proud Boys told The Oregonian the group achieved its goal.

“We wanted national attention and we got it.” Biggs said. “Mission success.”

Part of this national attention came from President Donald Trump, who tweeted about the events in Portland. He shared his possible intent to list Antifa as an “Organization of Terror.”

The right-wing group saw this tweet as a confirmation of their success. The Oregonian also reported that the Proud Boys intend to return to Portland on a monthly basis unless Mayor Wheeler “takes charge and removes the scourge of violent domestic terrorists from his city,” which they said in reference to Antifa.

However, others saw Antifa emerging as triumphant. Eric K. Ward, the Executive Director of the Western States Center, released a statement claiming that some businesses were turning away right-wing protesters on Saturday for promoting hate.

Mayor Wheeler also spoke against Biggs during the press conference.

“At a time when people are expressing hatred, at a time when people are expressing intolerance, when there’s rhetoric that is aimed predominantly at women and people of color, and immigrants, it creates a sense of uncertainty and a sense of fear,” Wheeler said. “And so Mr. Biggs and others saying that they’re going to come here, that feeds in to that sense of fear. So I want to be very clear. We do not want him here in my city. Period.”

He also called Trump’s tweet about Antifa and the protests “unhelpful” in an interview with CNN.

See what others are saying: (Associated Press) (The Oregonian) (Vox)