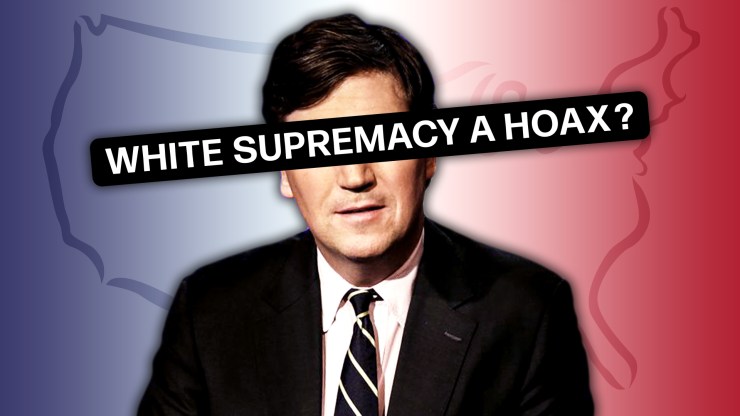 #FireTuckerCarlson began trending on Twitter after the Fox News host said white supremacy is “not a real problem in America” and is a “hoax.”

“If you were to assemble a list, a hierarchy of concerns, of problems this country faces, where would white supremacy be on the list?” Carlson asked. “Right up there with Russia, probably. It’s actually not a real problem in America.”

“The combined membership of every white supremacist organization in this country would be able to fit inside a college football stadium,” he continued.

“I mean, seriously. This is a country where the average person is getting poorer, where the suicide rate is spiking. ‘White supremacy, that’s the problem.’ This is a hoax. Just like the Russia hoax. It’s a conspiracy theory used to divide the country and keep a hold on power. That’s exactly what’s going on.”

These comments come just days after a shooting in El Paso that left 22 people dead and dozens more injured. The shooter allegedly left behind a manifesto calling immigration an “invasion,” supporting the shooter in Christchurch, and saying that the country should be divided so that each race has its own territory.

After hearing Carlson’s comments, many on social media called for Fox News to cancel his show and for viewers to boycott the program.

One user said that Carlson was “part of the problem.”

“People died @FoxNews,” another said. “And he’s on TV lying to America.”

Some also shared his sponsors and encouraged people to boycott them.

While others countered arguments he made.

One of the most widely shared reactions came from CNN’s Don Lemon. He aired the clip of Carlson’s remarks on his show and said, “Was not the dumbest thing you’ve ever heard?”

“Listen, I don’t know how anyone can say that considering what happened this week,” he later added.

Some Twitter users did defend the news personality by using the hashtag #IStandWithTuckerCarlson.

Hate Crimes in the U.S. Are on the Rise

Despite those defending Carlson’s claims, numerous reports and studies indicate that white supremacy could still pose as a real threat as hate crimes are on the rise.

According to the FBI, there was a 17% increase in hate crime incidents between 2016 and 2017. In over half of the cases in 2017, the main bias motivation was race, ethnicity, or ancestry.

In July, the FBI announced that in nine months, they had made close to 100 arrests involving domestic terrorism, and most of those cases involved white supremacy.

In a statement made Sunday regarding the shootings in El Paso and Dayton, the FBI said that the attack in El Paso “underscores the continued threat posed by domestic violent extremists and perpetrators of hate crimes.”

The FBI is not the only one with reports of this nature. According to the Anti-Defamation League, right-wing extremists were linked to at least 50 extremist-related murders in 2018. Their report says this makes them “responsible for more deaths than in any year since 1995.”

See what others are saying: (Washington Post) (Axios) (Slate)