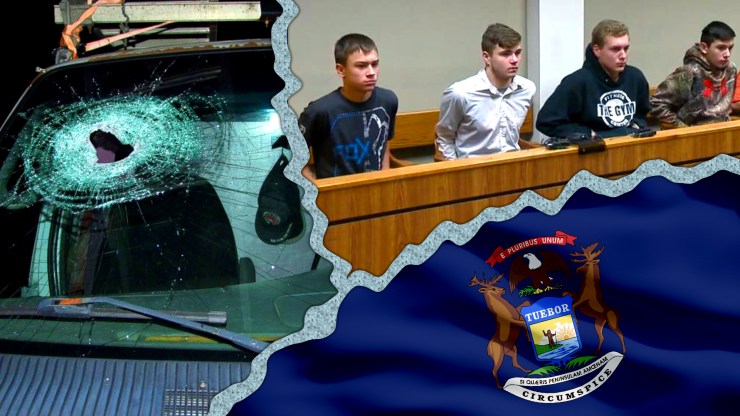 Four Michigan teens who pleaded guilty to throwing rocks off a highway overpass, causing the death of a 32-year-old passenger below, may be sentenced as adults.

Genesee County Circuit Court Judge Joseph Farah rejected a motion on Tuesday to send the teens to a juvenile detention center. Attorney’s for the teens now have to decide whether to accept adult sentencing, head to trial, or reject the judge’s revision to the plea agreement and negotiate a new deal with the Genesee County Prosecutor’s Office.

Five teens in total were arrested for their role in the death of Kenneth A. White. On October 18, 2017, the four juveniles and one other teen were throwing rocks from a highway overpass when one of them hit White.

White was sitting in the passenger seat of a van on his way home from work when the 6-pound rock smashed through the windshield, hitting him in the face and then the chest. He was transported to Hurley Medical Center in Flint and later pronounced dead.

“The injuries are horrific. … I gasped out (when I saw them)” Genesee County Prosecutor David Leyton said during the teens’ trial in 2017.

About 20 rocks in total were found on the highway, according to local police. The teens also threw tire irons, mufflers, and even a shopping cart at different times and areas.

The fifth teen, 19-year-old Kyle Anger, is the one specifically accused of throwing the rock that killed White. He pleaded guilty to second-degree murder in exchange for other charges to be dropped. Anger was over 18 at the time of the incident and will be sentenced to prison at a later time.

The four other teens submitted a deal to have the second-degree murder charge changed to manslaughter, along with having the other charges dropped, according to MLive. However, that had not yet been accepted by the court.

Judge Farah went against the advice of several professional juvenile experts who testified at a hearing in the fall. Each recommended juvenile sentencing, according to ABC News.

However, in court Farah said that while none of the four teens had actually thrown the fatal rock, none of them had been forced to be there. “The seriousness of the alleged offense is as high as it gets,” he said in the court Tuesday. “This is a homicide.”

Farah pointed to two days of Snapchat messages that were sent between the teens, noting that several of them read “LOL,” “LMAO,” “HAHA,” even after learning that they had killed someone.

“We could possibly go to prison for life from this,” Farah read from the messages. “You guys knew what could’ve happened. And, if we do get caught — which we won’t — it’s our own fault. LOL. We gotta take our punishment. Lay low for a while and everything will be fine.”

According to the judge, after news reports said that White had died, the teens’ Snapchat conversation mentioned getting teardrop tattoos to commemorate the crying of his family.

“Well, maybe, we should (get) tattoos with ‘Crip Gang’ next to the tattoo,” the judge read.

Farah also referred back to testimony that the teens had dropped items from overpasses between six to 10 times before, damaging at least six vehicles.

“What was the purpose? Wait till the road cleared and drop to see it break? No. (It was) to make contact in this (game) called ‘Overpassing.’ To be able to say aloud ‘Dinger!’ when a car was hit,” he said.

“This was not a situation where someone drove by and saw a rock on the side of the overpass and said, ‘Hey, let’s throw this rock over and keep on going,’” Farah added. “There wasn’t one event, nor was it done at a single location. The rocks and other items were gathered from other locations, loaded in a trunk and then driven to overpasses to throw them over.”

The victim’s mother, Teresa Simpson, said after the hearing that she was pleased with the judge’s decision.

“I’m so glad that Kenneth is getting the justice he deserves. … My prayers were answered,” Simpson told WXYZ-TV in Detroit. “I’m ecstatic over the decision that was made today. … It’s what we all wanted for him.”

Meanwhile, lawyers for the teens said they were disappointed with the ruling.

“We’re back to the drawing board. Each one of the four boys has a mechanism within that plea that they have the option to withdraw the plea should the court not have granted juvenile sentencing. So the court made its decision, not granting juvenile sentencing, and I’m sure all the lawyers are gonna go back to the drawing board,” said lawyer Michael Manley.

See what others are saying: (CNN) (ABC News) (MLive)