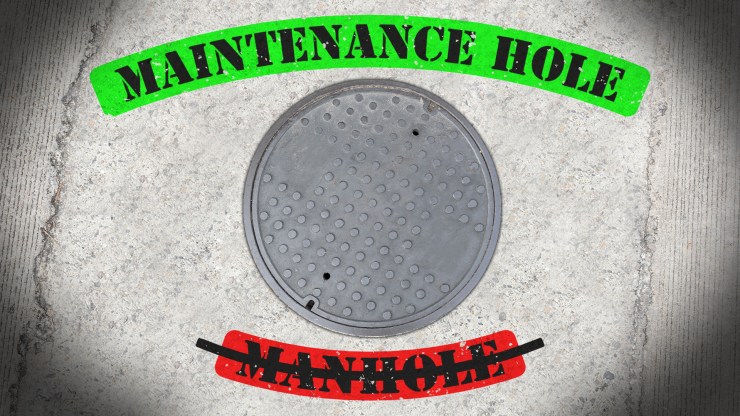 The Berkeley City Council unanimously passed a measure on Tuesday that would replace more than two dozen gender-specific words from its municipal code in a move towards improving nonbinary gender inclusivity.

The ordinance on gender-neutral language will replace words like “he” an “she” to “they” and “them” in the city code. But it will also do away words like “manholes,” “manmade,” and “manpower.” Instead, “manholes” will be changed to “maintenance holes” and other references to “manmade” will be changed to “artificial.” Terms like “human effort” or “workforce” will replace “manpower.”

Job titles like “bondsman” will be “bonds-person,” “firemen” and “firewomen” will now be “firefighters.”

“Fraternity” and “sorority” soon be changed to “collegiate Greek system residence,” along with several other changes.

Berkeley city councilmember Rigel Robinson, a 23-year-old recent graduate of the University of California at Berkeley, sponsored the ordinance in March. “In recent years, broadening societal awareness of transgender and gendernonconforming identities has brought to light the importance of non-binary gender inclusivity,” Robinson’s ordinance reads.

“Therefore, it is both timely and necessary to make the environment of City Hall and the language of city legislation consistent with the principles of inclusion.”

“Having a male-centric municipal code is inaccurate and not reflective of our reality,” Robinson later told The Washington Post via email.

The move still requires a second reading at the council for the proposal to become official. That will then be followed by a 30-day waiting period. However, based on Tuesday’s unanimous vote, the language change is expected to easily pass through the remainder of the process.

“There is power in language. This is a small move, but it matters,” Robinson tweeted after the ordinance was approved.

Robinson’s office estimates that it will cost about $600 to implement the change to the municipal code.

The move is not surprising for Berkeley. The city has implemented similar changes in the past in an effort to make the community more inclusive. In February, the city began giving all employees the option to receive a name badge with a preferred pronoun printed alongside their professional title.

Other efforts to improve inclusivity have also made waves across the state. In 2014, then-Governor Jerry Brown approved a measure that replaced “husband” or “wife” in state law with “spouse.”

Then in 2017, California became the first state to provide a third gender option on state driver’s licenses, identification cards, and birth certificates with the passage of Senate Bill 179.

California is not alone in that move. Maine and Washington D.C. have also made efforts to recognize gender-neutral individuals on drivers licenses.

Was an Iowa Official Asked to Resign Over His Love of Tupac? He Says He Doubts It