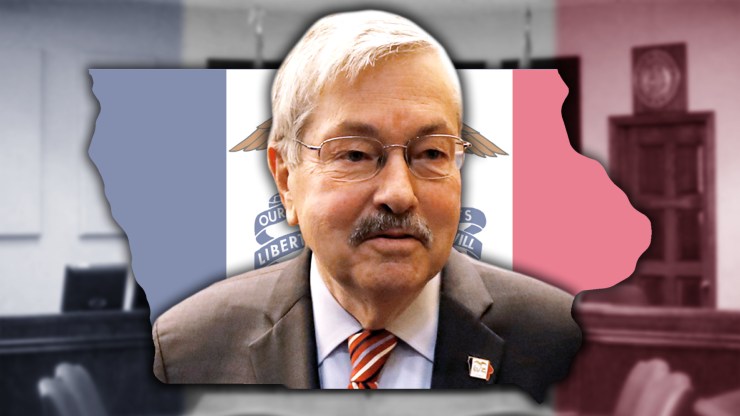 A jury in Iowa awarded former state official Chris Godfrey $1.5 million after they determined that he had been discriminated against for his sexual orientation by the governor at the time, Terry Branstad.

Godfrey, who was Iowa’s commissioner of workers’ compensation, filed a lawsuit against Branstad, the state of Iowa, and other state officials in January 2012. Court records show that after seven years, the case finally went to trial in June 2019 and ended six weeks later with the decision to award Godfrey.

The former state official was awarded $1 million for being denied his constitutional due process rights and another $500,000 for the discrimination and retaliation he faced.

Godfrey was appointed Iowa’s workers’ compensation commissioner in 2006 and was reappointed just before Terry Branstad became Iowa’s governor in 2011. Godfrey says that once Branstad came into office, he asked Godfrey to resign from his role. The state official refused and as a result, his salary was cut by almost $40,000.

In Iowa, a commissioner holds their position for 6 years to protect it from partisan politics. However, the governor is able to ask a commissioner to step down from their role and if that request is refused, the governor can reduce the commissioner’s pay. According to local reports, Godfrey was one of 29 appointees Branstad asked to resign when he came into office.

Throughout the lawsuit, Branstad insisted he did not know Godfrey’s sexual orientation and asked him to resign due to concerns that businesses had.

However as the case continued, Branstad later admitted that Godfrey had only received positive reviews.

When the lawsuit went to trial in June 2019, Godfrey’s lawyer argued that he was shunned by Branstad’s office because he was the only openly gay man working as an executive at the time. The attorney noted specific examples, like how Godfrey was not invited to a retreat for Branstad’s department heads and executive staff.

In addition to Godfrey, other officials in Iowa have spoken out about Branstad, like current Polk County Supervisor Matt McCoy.

During the trial, McCoy testified that Branstad’s administration was a “men’s club,” and added that “being gay in 2011 through 2015 was not an easy thing and [Godfrey] was definitely experiencing discrimination.”

As for Godfrey, he explained that the lawsuit for him was about getting justice. “After I had been asked to resign twice, after my pay was slashed, I felt obviously personally attacked, I needed justice,” he told the court.

What happened to Branstad?

As for the former governor, in December 2016 he was appointed U.S. Ambassador to China by President Donald Trump. Branstad was later confirmed in May 2017, after a vote 82 to 13, and he resigned as governor two days later.

According to The Economist, Branstad and China’s ambassador are “old friends,” which is considered a great compliment in Chinese culture. The two met in 1985 during Branstad’s first term as Iowa’s governor. The article notes that in 2015, Iowa’s agricultural exports to China made up $1.4 billion of the $2.3 billion exported from the U.S.

Was an Iowa Official Asked to Resign Over His Love of Tupac? He Says He Doubts It

Luxury Homes, Cars and Yachts?! How Medicare Fraud Is Paying For Them