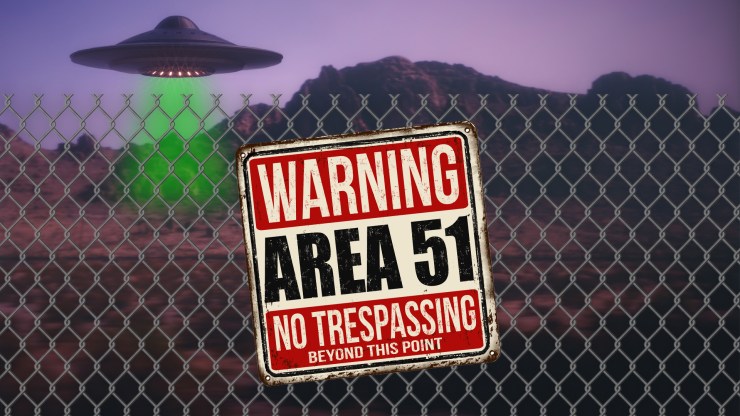 Over 470,000 people have responded to an event on Facebook pledging to storm Area 51 in Nevada to “see them aliens.”

The event, called “Storm Area 51, They Can’t Stop All of Us” is now a gathering of both the extra-terrestrial and meme-obsessed users of the Internet. In addition to those who have said they will be going, another 480,000 have claimed they are “interested.” Calendars worldwide have marked September 20 as the date to head to the conspiracy-embroiled Air Force base.

For those less familiar with the world of martian mysteries, Area 51 is the subject of several conspiracy theories, largely due to its secretive nature and the lack of information the U.S. government releases about it. Some claim it is the site of UFOs and home to alien ship crashes. Others even believe time travel is being developed at the site.

The details on the event page suggest that everyone will gather for a mass meet-up before storming the base.

“We will all meet up at the Area 51 Alien Center tourist attraction and coordinate our entry,” the event says. “If we naruto run, we can move faster than their bullets. Lets see them aliens.”

The Naruto run is likely in reference to the popular Manga character known for his high-speed run with his hands behind his back.

A pinned post on the page, written by Jackson Barnes, outlines a thorough but ambitious plan of attack. The first stage involves the “Kyles,” represented by black rectangles, storming the front line. The “Kyles” appears to refer to an online meme that, according to Know Your Meme, characterizes someone named Kyle as “an angry white male teenager.” One that might toss back a few cans of Monster, punch through drywall and spray his room with copious amounts of Axe bodyspray. Their job is to “go beserk and become an impenetrable wall.”

The next step involves “Rock Throwers,” which are represented in the graphic as blue rectangles. Their job is pretty self-explanatory, but they claim to have safe intentions.

“We dont want to hurt them, we just want to annoy them enough to not shoot the kyles as often,” Barnes writes.

And the last element of the plan involves the aforementioned Naruto runners, marked in green.

“The two naruto runner battallions will run full speed around the north and south flank, and shadow clone jutsu, effectively trippling our numbers, and overwhelm the base,” Barnes explains.

It Was All in the Name of Memes

Even though he mapped out a detailed scheme, Barnes does not actually have any intentions of seeing his plan come to fruition. His goal behind the post was just to get a few good old fashioned “likes” online.

“P.S. Hello US government, this is a joke and I do not actually intend to go ahead with this plan,” Barnes wrote at the bottom of the post. “I just thought it would be funny and get me some thumbsy uppies on the internet. I’m not responsible if people decide to actually storm area 51.”

It seems most people involved are in on the joke, too. The page is filled with users making jokes about fighting off guards all in the name of finding aliens. The story also made its way to Twitter, where people had their own hilarious meme fest.

However, we will have to wait until September 20 to see if anyone actually takes the risk of storming the curious landmark.

See what others are saying: (Newsweek) (TIME) (USA Today)