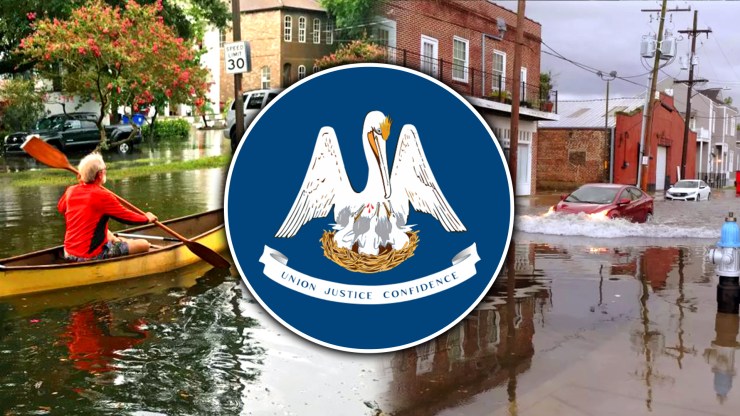 Louisiana has declared a state of emergency as residents prepare for Tropical Storm Barry which has already caused flash floods and inclement weather throughout the state.

The storm is expected to make landfall late Friday or early Saturday, and forecasters anticipate that it could be upgraded to a hurricane before then.

The National Weather Service issued a hurricane warning Thursday for the areas between Intracoastal City and Grand Isle, about 50 miles south of New Orleans.

Thousands of people are already under mandatory evacuations, while others have been told to prepare for an intense rainfall, strong winds, and enormous storm surges. Around 3,000 National Gaurd members have been deployed for search and rescue efforts.

If Barry does become a hurricane, it would likely be a fairly weak one in terms of wind speeds.

As of Friday afternoon, wind speeds had reached 65 miles per hour, with forecasters predicting it will make landfall just above 74 miles per hour, the speed required to be categorized as a hurricane.

As Louisiana prepares for the incoming storm, many are far more concerned about the flood risks and storm surges from Barry’s heavy rains than the damage its winds could create.

“There are three ways that Louisiana can flood; storm surge, high rivers, and rain. We’re going to have all three,” Edwards continued.

Forecasters have predicted that the storm could bring a three-to-six-foot storm surge to coastal areas. The Mississippi River represents one of the biggest risks to the state at large.

Between 10 to 20 inches of rain are expected across Louisiana, posing a dangerous threat of flooding from the Mississippi River, which is already inundated with unusual amounts rainwater.

The Mississippi River, which is usually at 6 to 8 feet in midsummer in New Orleans, is now at 16 feet because of record flooding along the waterway.

“This is the first time we’ve had a tropical system with water levels on the river this high,” Jeffrey Graschel, a hydrologist with the weather service’s Lower Mississippi River Forecast Center told CNN.

Low-lying parts of New Orleans have already flooded earlier this week in the wake of heavy storms ahead of Barry. It was reported that 10 inches of rain had fallen in parts of the city by noon on Wednesday.

Many streets were covered with dangerous amounts of water, and power outages were also reported.

On Friday, the National Weather Service of New Orleans issued an alert on Twitter warning that the city was “looking at potential for life-threatening flooding in some areas.”

A Test for New Orleans

Regardless of Barry’s strength, many view the storm as the first real test of the storm system improvements put in place after Hurricane Katrina in 2005.

Specifically, many New Orleans officials and residents are concerned about the levees that protect the city, and that infamously broke during Katrina, causing massive flooding and damages that New Orleans has still not fully recovered from.

Experts expect rainwaters to push the Mississippi River to swell to 19 feet, just a foot below the tops of the shortest levees.

The Army Corps of Engineers has said that the Mississippi River will likely be contained by levees that protect New Orleans, and many of the floodgates near the river have already been closed.

However, officials still warned that the system of levees and drainage pumps have limited capacity. New Orleans Mayor LaToya Cantrell said Thursday that the city’s pumps were operating at “optimal capacity,” but also added that Barry’s downpour could outpace the pumps ability to move the water.

Still, Cantrell stopped short of mandatory evacuations in the city. On Friday, Cantrell announced a voluntary evacuation for the areas outside of the protection of the levees, noting on Twitter that certain areas could expect “a surge between three to six feet.”

See what others are saying: (CBS News) (CNN) (NPR)