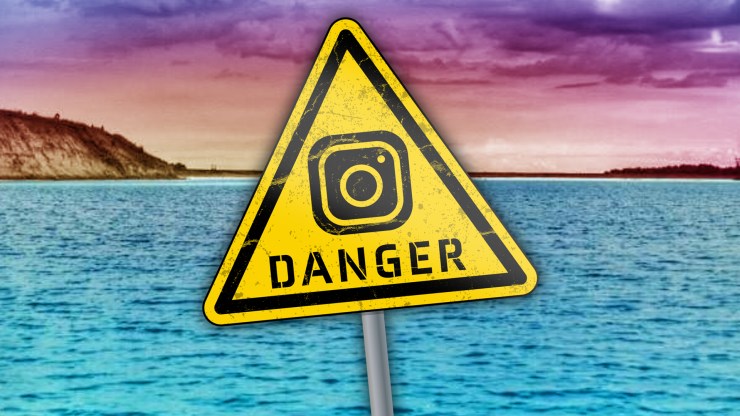 A Siberian energy company is warning tourists to avoid swimming in a breathtaking blue lake that has become a popular backdrop for Instagram photos.

Social media users have been flocking to the site to snap pictures in the bright blue water. The little piece of paradise just outside of the industrial city of Novosibirsk has even been nicknamed the “Maldives of Novosibirsk,” named after the tropical destination in the Indian Ocean.

The area even has its own Instagram page with over 200 posts showing visitors in the water.

But the lake is not actually a natural wonder. It’s a man-made chemical waste site, and that beautiful blue color is the result of a huge dump of ash from a nearby coal plant. Now the company that runs the plant is warning visitors to stay out of the water.

The waste comes from a nearby power plant, operated by the Siberian Generating Company.

The company took to the Russian social media site VK last month to warn visitors about the water, writing: “In the last week, our ash dump of the Novosibirsk TEZ-5 has become the star of social networks.”

“It is not poisonous,” the company said of the water. “The radiation level is normal,” it added, saying that tests were conducted by two independent labs.

“But you can not swim in the ash dump. The water in it has a high alkaline environment,” the statement continued. “This is due to the fact that calcium salts and other metal oxides are dissolved in it. Skin contact with such water may cause an allergic reaction!”

The post goes on to say that the bottom of the pond is muddy, which makes getting out of the reservoir alone “almost impossible.”⠀

“THEREFORE, WE ASK YOU VERY MUCH THAT IN YOUR QUEST FOR A SELFIE YOU DON’T FALL DOWN INTO THE ASH DUMP! THIS IS THE BIGGEST RISK,” the company said.

Quests for the Perfect Photo Continue

Still, the warning hasn’t deterred people from the area. Dozens of social media users have continued to visit on their quests for the perfect Instagram picture, with some getting into the water in swimsuits and paddleboards.

One couple even took their wedding photos in the area. In an Instagram post, the photographer said the photos were a “creative idea and no one really organized a picnic on the ash dump and did not splash in the water.” However, she added that she thought the danger was “slightly exaggerated.”

“Naturally, you should not swim there, but because of a photoshoot lasting an hour you will not grow a third hand.”

But others have ignored the warnings. According to a translation from BBC, one user wrote: “The next morning, my legs turned slightly red and itched for two days, but then everything went. But what wouldn’t you do for the sake of such pictures?”

The chemical dumping ground is now the latest example of the lengths some people go to take the perfect Instagram pictures. In March, Lake Elsinore, California was swarmed with tourists rushing to take photos in the fields of poppies. Officials in the area were even forced to briefly close access to the fields and declare a “public safety crisis.”

Some have even been harmed while trying to snap a selfie. A 2018 study found that over a six-year period, more than 250 people worldwide died while taking a photo of themselves. Several of the deaths stemmed from transportation accidents, animal attacks, falling from heights, or incidents related to firearms and electrocution.

Tampering With Store Products Has Become an Online Trend