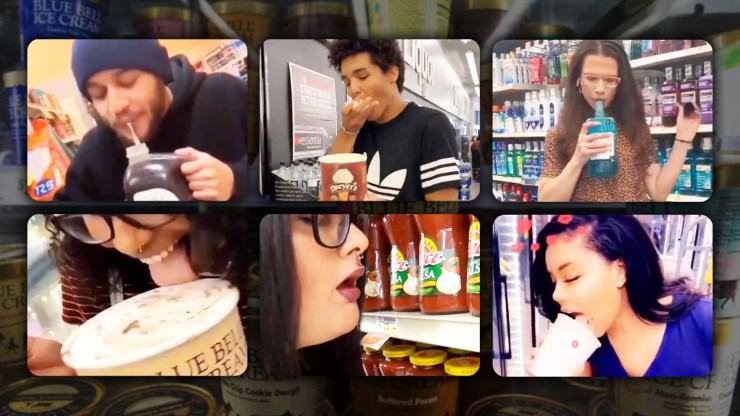 Many social media users are appalled by the Internet’s newest viral trend: tampering with products in grocery stores.

The question of “Why?” can’t really be answered, but we do know how. The trend started when a video of a girl licking a tub of Blue Bell ice cream and putting it back into the grocery store’s freezer went viral at the end of June.

Authorities were able to pinpoint the store in Lufkin, Texas and locate the girl in the video, whom they said is a minor. The Lufkin Police Department said that her situation would be looked at by the juvenile justice system.

However, the legal trouble that unfolded around this situation did not stop people from joining in. Since then, more videos of people tampering with ice cream have gone viral on Twitter.

Some of the copycats will also see legal consequences. One man, Lenise Martin III, in Louisiana who participated in the fad was arrested.

According to WLOS, he was charged with unlawful posting of criminal activity for notoriety and publicity, and criminal mischief for allegedly tampering with property. However, Martin claims he never actually put the ice cream back in the freezer and told The Washington Post he had already purchased it.

Since the Internet is, more often than not, an agent of chaos, this viral trend has not stopped at ice cream. People have found ways to spread their germs on all kinds of grocery store products.

One viral video shows someone taking Listerine off the shelf, gargling it, and spitting it back into the container.

Many are also sharing a video of someone spitting into a jug of Arizona sweet tea.

A video of a woman burping on various products in a grocery store is also being re-circulated on Twitter.

Internet users have had strong reactions to this trend. Some have posted about preventative measures being taken. A police department in Texas shared a photo of officers guarding an ice cream freezer to stop these shenanigans.

A photo of what appears to be an ice cream freezer locked up, requiring employee assistance, has also made its way around Reddit and Twitter.

Many are disgusted by the fad and think it should stop, including Paris Jackson, who tweeted about the viral videos.

Others have also shared their frustration online.

There’s no telling how long this trend will stick around the web, so until we make it out on the other side, grocery shop wisely.

See what others are saying: (Vice) (WLOS) (Eater)