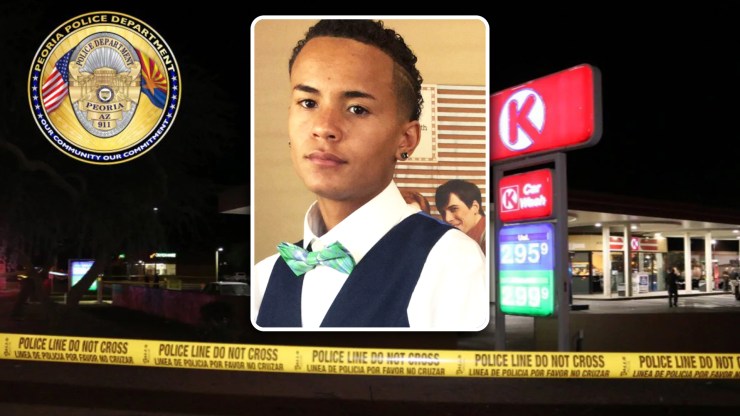 Police in Peoria, Arizona say a man stabbed and killed 17-year-old Elijah Al-Amin at a gas station Thursday morning because the teenager’s music made him feel “threatened.”

According to the victim’s father, Al-Amin was leaving work and stopped at a nearby gas station with his girlfriend when he was attacked.

“He was getting a fountain drink, and a dude randomly walked in and stabbed my son in the neck,” Mr. Al-Amin told 12 News.  “So my son, he got stabbed he ran out, and he collapsed.”

The suspect, 27-year-old Michael Adams, was arrested a short time later and found with a pocket knife in his possession along with blood on his clothes, according to local reports. He is currently in custody for first-degree murder.

Police documents say Adams allegedly admitted to stabbing Al-Amin telling officers he did so because the teen was playing “rap music in the parking lot.” According to the documents, Adams also said the music made him feel “threatened” and feel like he had to “protect himself and the community from the victim.”

“Rap music makes him feel unsafe, because in the past he has been attacked… by people who listen to rap music,” court records state.

Adams bail is set at $1 million and he is scheduled to appear in court on July 11.

Court records from Maricopa County show that Adams has a history of criminal activity and violence. In October of 2018, he was sentenced to 13 months in prison for aggravated assault and two counts of unlawful theft detection.

According to the Arizona Department of Correction Inmate Datasearch, Adams was released from prison on July 2, just two days before Al-Amin was killed. The datasearch also shows that while in custody, Adams had several disciplinary infractions, including disorderly conduct and assault on an inmate.

Adams’ lawyer, Jacie Cotterell, says the reason for her client’s actions is because he is mentally ill, with both autism and ADHD.

“My client is a very unfortunate young man,” Cotterell told ABC15.  “He suffers from what are some obvious mental illnesses, he’s been ill served by the state.”

However, a spokesperson for the Arizona Department of Corrections told local reporters that Adams “was not designated [as] seriously mentally ill (SMI).”

The spokesperson added that “prior to his release, Inmate Adams was provided contact information for services in the community such as continuing care, housing, welfare as well as other community resources.”

In response to Cotterell’s argument, the teen’s father said that any mental illness Adams may suffer from does not excuse his actions.

Some social media users agreed with Mr. Al-Amin and tweeted that mental illness does not justify a crime.

The hashtag Justice for Elijah began trending on Twitter, with many calling the attack a hate crime.

Al-Amin was an upcoming senior in high school and just two weeks away from his 18th birthday.