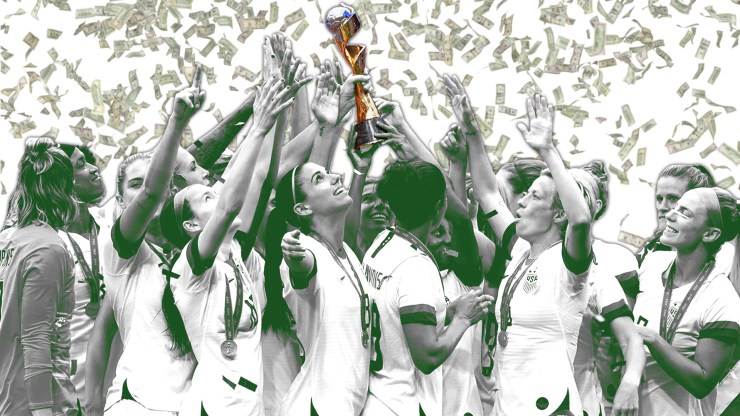 On Sunday, the USWNT beat the Netherlands 2-0, securing themselves another title and cementing their status as the best women’s soccer team in the world. During post-game celebrations, FIFA President Gianni Infantino walked onto the field alongside French President Emmanual Macron, and the two were met with a clear request from the crowd.

This World Cup win for the American women follows a discussion about their talents and success compared to the men’s team. The U.S. Men’s National Team has never won a World Cup. They also do not send their full team to compete in the Olympics, while the women have won four gold medals.

“Despite the fact that these female and male players are called upon to perform the same job responsibilities on their teams and participate in international competitions for their single common employer, the USSF, the female players have been consistently paid less money than their male counterparts,” the lawsuit states.

“This is true even though their performance has been superior to that of the male players – with the female players, in contrast to male players, becoming world champions.”

Rapinoe, who walked out of the World Cup both the Golden Boot and Golden Ball winner, has also made statements on her own about this pay gap. According to ESPN, after the game, she spoke about the need for the conversation to move forward.

“It’s time to sit down with everyone and really get to work,” Rapinoe said. “This game has done so much for all of us. We’ve put so much into it. I think it’s a testament to the quality on the field, and I don’t think everything else is matching that. So how do we get everything to match up and continue to push this forward. Because I think at this point the argument we have been having is null and void.”

Soccer players are not the only ones pushing for equal pay. Last week, several members of Congress wrote a letter to the president of the USSF calling the pay gap “indefensible.”

“The U.S. Soccer Federation should work to correct course and close the wage gap so that the only thing women athletes are fighting for is the world title or a gold medal,” the letter read. “Instead, the message sent to women and girls is that their skills and accomplishments are of lesser value.”

President Donald Trump was also pressed about the issue after Sunday’s game. According to a White House press pool, he was asked about the women’s pay, and if anything should be done.

“I would like to see that, but you’ve also got to look at the numbers,” Trump responded. “You have to look at who’s taking in what.”

Since the start of the World Cup and the resurgence of pay gap discussions, several reports have taken a closer look at the numbers. A June report from The Wall Street Journal found that in recent years the women’s team has boosted more revenue for the USSF than the men’s.

Their report looked at audited USSF financial statements and said that between 2016 and 2018, women’s games generated about $50.8 million in revenue while the men’s generated $49.9 million.

The Post also estimates that last year, the women made more in bonuses and salary, but also played close to twice as many games and won more often.

The article outlines a scenario that shows if both teams were to play 20 games in a season, the women would make 89% of what the men make. Before 2016, this would have been even lower. Before their updated bargaining agreement was put into place, they would have made 38% of what the men would.

Others have brought up the fact that as of last week, the U.S. women’s home jersey became the most sold jersey on Nike’s website in one season.

FIFA says that they plan on doubling the women’s World Cup prize to make it $60 million by 2023. This still is a fraction of the men’s prize, which is also set to increase to $440 million.

Many, including player Tobin Heath, see the U.S. team’s win and the conversation that it started as a pivotal moment for equal pay.

“It’s cool because unless we get to the final, and obviously win the final, maybe that chant isn’t being chanted,” Heath said. “So I think in a lot of ways, this team has been, I guess you could call it, single destiny with this fight for equal pay.”

See what others are saying: (The Wall Street Journal) (ESPN) (The Washington Post)

33 Arrested in Fourth of July Anti-ICE Protest in Philadelphia