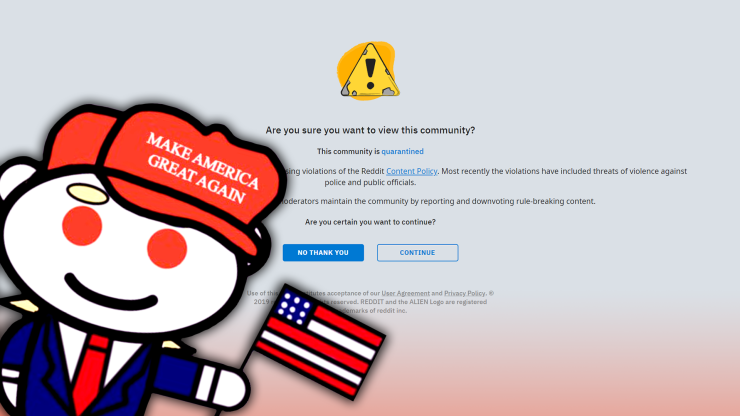 The controversial subreddit “r/The_Donald” has been quarantined after threats of violence were posted on the page.

r/The_Donald is a popular pro-Trump subreddit among President Donald Trump’s fanbase. Users share memes and other viral content about him and other political topics. When Trump was a presidential candidate in 2016, he did an Ask Me Anything in the community.

A Media Matters report on Monday said that users in r/The_Donald had been using violent language, specifically when speaking about Oregon’s governor, who called for officers to bring back Republican senators who left the state to avoid a vote on climate legislation. Many of the users in the subreddit were angry with the governor, taking the side of the Republican senators.

Media Matters shared posts that have since been removed from the subreddit. They say things like, “none of this gets fixed without people picking up rifles,” “no problems shooting a cop trying to strip rights from Citizens,” and “It’s time to threaten, because nothing else is working. It’s time to tell them that EVERYTHING will burn if it does not change.”

While Reddit did not cite Media Matters in their decision, the subreddit was quarantined just two days after their report was posted. They wrote to the moderators specifically mentioning the comments made about the recent events in Oregon.

According to Reddit, the goal of a quarantine is “to prevent its content from being accidentally viewed by those who do not knowingly wish to do so, or viewed without appropriate context.” The quarantine also means that the subreddit cannot generate revenue, appear on the popular page, or be found via search.

Now when users go to the subreddit, they are met with a warning alerting them that the community has been quarantined.

“It is restricted due to significant issues with reporting and addressing violations of the Reddit Content Policy,” the warning says. “Most recently the violations have included threats of violence against police and public officials.”

The user must then click to confirm whether or not they want to continue. Once on the subreddit, a similar warning is placed at the top of the page.

Users in the community are upset about the quarantine. One post claims that none of the users ever broke the rules and said that this an attack by the left.

“None of these comments that violated Reddit’s rules,” the post starts. “Those comments were reported on by an arm of the DNC and picked up by multiple news outlets.”

It later encourages the community to follow the rules and report bad behavior.

Andrew Surabian, a GOP strategist who used to work for Trump, said this was part of “big tech” not wanting Trump re-elected in 2020.

Another Twitter user said Reddit’s action was good and that users calling for hate crimes crossed a line.

Meanwhile another user said this was a step in the right direction.

Reddit also defended their choice in a statement to The Verge.

“We are clear in our site-wide policies that posting content that encourages or threatens violence is not allowed on Reddit,” the statement reads. “As we have shared, we are sensitive to what could be considered political speech, however, recent behaviors including threats against the police and public figures is content that is prohibited by our violence policy.”

See what others are saying: (The Verge) (Mashable) (Daily Beast)

Tampering With Store Products Has Become an Online Trend