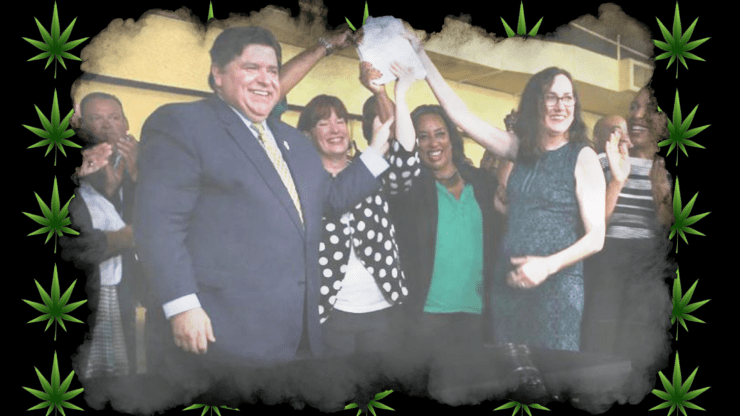 Illinois became the 11th state to legalize marijuana Tuesday when Governor J.B. Pritzker signed a bill that will make the sale of cannabis legal and implement sweeping criminal justice reform.

The bill is set to go into effect on Jan. 1, 2020, and will allow Illinois residents 21 and over to buy and possess up to 30 grams (1 ounce) of recreational marijuana. Non-residents visiting the state will be allowed to purchase up to 15 grams.

The expungement provision is one of several in the bill targeted towards communities of color that have been disproportionately impacted by the war on drugs.

“In the past 50 years, the war on cannabis has destroyed families, filled prisons with nonviolent offenders and disproportionately disrupted black and brown communities,” Pritzker said at the bill signing.

“Studies have shown time and time again that black and white people tend to use cannabis at the same rates, but black people are far more likely to be arrested for possession,” he continued. “Today we are giving hundreds of thousands of people the chance at a better life.”

In addition to the expungements, the new law also includes a social equity program that will give grants and loans to individuals in communities affected by the war on drugs who want to start a cannabis business.

The program will also give preference to minorities who apply for businesses licenses. Heather Steans, the main Illinois state senator who sponsored the bill, predicted that at least 20% of licenses will go to people of color, according to Rolling Stone.

Additionally, the social equity program mandates that 25% of tax revenue from marijuana sales will go to redeveloping and reinvesting in communities that have been hurt by the war on drugs.

Law enforcement organizations expressed concern over the bill throughout the legislative process.

Police have argued that enforcing driving under the influence laws will be difficult as the technology for testing marijuana impairment needs to be developed more.

While the legalization bill was being debated in the state’s legislature, law enforcement lobbyists successfully killed a measure that would have allowed adults over 21 to grow up to five marijuana plants for personal use.

Police again argued that enforcement would be difficult, and as a result, the bill was amended so only medical marijuana users can grow plants at home.

However, law enforcement was not the only group that opposed the legalization or specific parts of it. According to Dan Linn, the executive director of Illinois NORML, the drug testing industry, as well as anti-drug groups and some religious organizations also fought against the bill.

Illinois now joins Washington, D.C. and 10 other states that have already legalized marijuana.

However, the state’s new law is a landmark in several ways. Illinois is the first state to legalize the sale of marijuana through its legislature rather than through a ballot initiative.

Illinois’ social equity program also represents one of the most comprehensive criminal justice reforms among states that have legalized marijuana.

Other states where cannabis is legal now have similar provisions, but those provisions were implemented separately after the states had already passed legalization.

Just last month Washington Gov. Jay Inslee signed a law that will allow misdemeanor marijuana convictions given before the drug was legalized to be vacated. The move came nearly seven years after the state voted to legalize marijuana.

In February, San Francisco became the first city in the U.S. to clear all eligible marijuana convictions when officials announced that they would dismiss 9,362 charges dating back to 1975. Again, the move came more than two years after California legalized marijuana.

Illinois’ new legalization law, by contrast, is the first one that mandates such extensive expungement from the start.

See what others are saying: (Rolling Stone) (The Associated Press) (CNN)