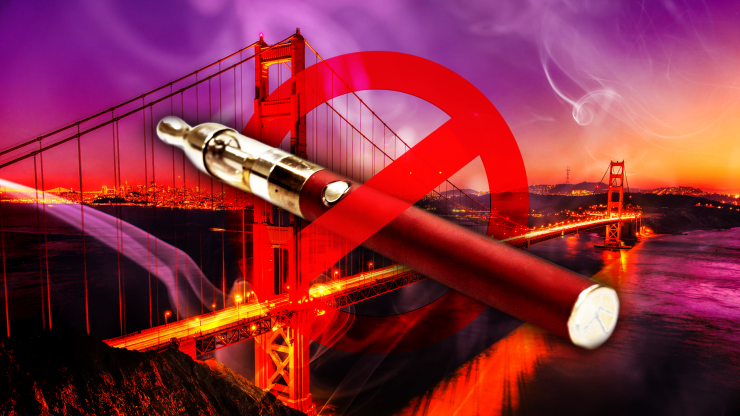 Board Of Supervisors Vote on Ordinance

San Francisco is poised to be the first U.S. city to ban electronic cigarettes.

On Tuesday, the San Francisco Board of Supervisors voted in favor of an ordinance that bans the sale and distribution of the product in the city, unless it has been premarket reviewed and approved by the FDA. Currently, no products of this kind have been.

The ordinance would also ban products from being shipped to an address in San Francisco through online orders.

The ordinance will now head next to Mayor London Breed, who is expected to sign it. Breed released a statement following the vote saying she believes this will benefit the health of young people in the city.

“There is so much we don’t know about the health impacts of these products, but we do know that e-cigarette companies are targeting our kids in their advertising and getting them hooked on addictive nicotine products,” Breed said. “We need to take action to protect the health of San Francisco’s youth and prevent the next generation of San Franciscans from becoming addicted to these products.”

Under the Tobacco Control Act, the FDA should have a role in reviewing e-cigarettes. The ordinance says that all new nicotine products, specifically those that entered the market after 2007, “must be authorized by the FDA for sale in the United States before it may enter the marketplace.”

“Virtually all electronic cigarettes that are sold today entered the market after 2007, but have not been reviewed by the FDA to determine if they are appropriate for the public health,” the ordinance continues.

San Fransisco City Attorney, Dennis Herrera, also released a statement on Tuesday about the vote, saying that San Francisco is taking action because the FDA has not.

“E-cigarettes are a product that, by law, are not allowed on the market without FDA review,” he said. “For some reason, the FDA has so far refused to follow the law. If the federal government is not going to act, San Francisco will.”

Currently, the FDA does have a plan to conduct reviews for these products. According to their site, e-cigarettes must be submitted for review by August 8, 2022. However, San Fransisco officials do not want to wait that long.

In the ordinance, officials wrote that the products will have been on the market for 15 years by that point. Between now and 2022, they estimate that six million more youths will have used e-cigarettes.

“San Francisco is not content to wait until then before addressing, for its residents, what appears from the evidence to be a major public health crisis that is going unattended,” the ordinance says.

The city of San Francisco is not alone in expressing frustrations with the FDA when it comes to their regulation of nicotine products and e-cigarettes. Several health organizations sued the FDA, saying that their inaction has lead to increased use of vaping products among teens.

In May, a federal judge sided with those organizations and said that the FDA needs to review e-cigarettes.

Youth and E-Cigarette Use

According to the CDC, one in five high school students uses e-cigarettes, while one in twenty middle schoolers use the product.

E-cigarette use in highschoolers increased from 1.5 percent in 2011 to 20.8 percent in 2018. The CDC also says that teens often become dependant on nicotine at a quicker rate than adults.

San Fransisco’s ordinance has received criticism. Juul, the leader in the e-cigarette industry in the U.S., is based in San Fransisco. Their spokesperson Ted Kwong released a media statement saying that this decision could cause problems for adult users.

“This full prohibition will drive former adult smokers who successfully switched to vapor products back to deadly cigarettes, deny the opportunity to switch for current adult smokers, and create a thriving black market instead of addressing the actual causes of underage access and use,” the statement said.

According to CNN, Juul supports stricter regulation, but not prohibition. The company says they want to include electronic age verification technology and limit how much can be purchased at once.

They are not the only critics. Dr. Steven A. Schroeder, a health professor at the University of California, San Francisco, told the New York Times he does not think the law makes sense.

“On the face of it, it’s ludicrous that we would ban e-cigarettes, but permit the sale of tobacco and cannabis.” he said. “It’s really smart politics but dubious public health.”

The ordinance will not become an effective policy until 30 days after the mayor signs it. After that, it has six months to be fully implemented.

See what others are saying: (CNN) (Esquire) (New York Times)