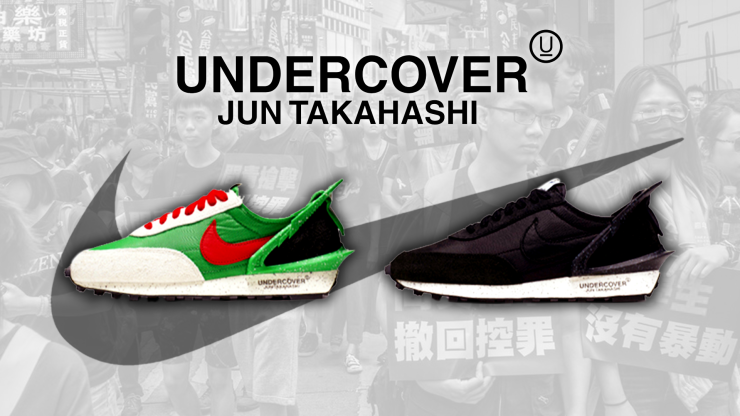 Nike pulled the sale of a new line of shoes in China after the Japanese designer of the line publically supported the protests in Hong Kong on social media, the Financial Times reported Wednesday.

Nike and the Japanese brand Undercover, lead by the designer Jun Takahashi, intended on releasing the limited shoe line this month.

However, the product was withdrawn entirely after Undercover posted a photo on it’s Instagram of posters in Hong Kong fighting against a proposed extradition bill.

The post included the text “no extradition to China.”

Undercover later deleted the post after receiving backlash from Chinese Instagram users, who use VPNs to access Instagram, which is blocked in China. After deleting the post, Undercover reportedly said it said was an “individual opinion” that had been posted by mistake.

YYSports, Nike’s retail partner in China and one of the country’s largest retailers, said they were given “urgent notice” from Nike to stop the launch of the new line. Other Chinese retailers also removed the shoes from sale without explanation.

One online vendor said it withdrew all Undercover brand products because of “special reasons,” but did not give details.

A person described as being “close to” Nike told the Financial Times that the event with Undercover probably will not hurt Nike’s sales or revenues in China, as the situation was dealt with quickly and the shoes were designed as a limited-edition collector’s item rather than a mass-marketed product.

Additionally, while the line did not launch in China, it did launch globally on June 21.

Regardless, the incident shines a light on the double-edged sword that is selling retail products to Chinese markets.

On one hand, China is a huge market and brings in a ton of revenue for multinational retailers like Nike. In Fiscal Year 2018, Nike reported more than $5.1 billion in revenue from greater China alone.

On the other hand, if Nike adjusts to the political needs of China, it risks being perceived by more liberal countries as bending to China’s authoritarian requests. This is especially difficult for Nike, which markets itself as an advocate for social causes.

However, it is not only Nike that has had these issues with selling products in China.

Last year, Mercedes-Benz apologized to Chinese consumers after they posted on their official Instagram account and used a quote from the Dalai Lama, who the Chinese government believes is a dangerous separatist.

Gap also apologized to Chinese consumers last year after a post on a Chinese social media site showed T-shirts with a map of China that did not include Taiwan, South Tibet, and the South China Sea, all of which China considers as territories that belong to them, but are disputed.

Meanwhile, the protests over the proposed extradition bill in Hong Kong have continued intermittently for the last few weeks.

The bill would let the government detain people accused of committing certain crimes and send them to countries or territories that Hong Kong does not have extradition agreements with, including mainland China.

The people of Hong Kong oppose the bill because they are concerned China could use the law to target political activists and dissidents who are critical of the Chinese government.

On June 15, Hong Kong’s chief executive Carrie Lam said she would suspend the bill indefinitely, but not fully withdraw it. The next day, the people of Hong Kong staged an even bigger protest with an estimated 2 million people in attendance.

Since then, the people have still continued to demonstrate, taking to the streets, surrounding and entering government buildings.

On Tuesday, hundreds of people demonstrated at foreign governments’ consulates in Hong Kong, to call on foreign leaders to address their concerns at the upcoming G20 summit in Japan.

See what others are saying: (The Financial Times) (Business Insider) (CNBC)