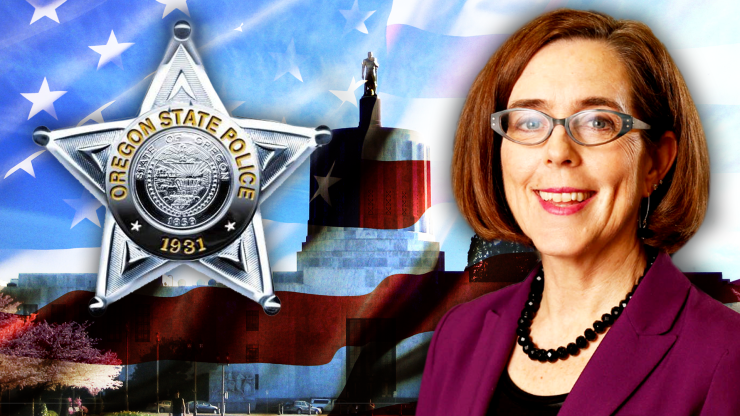 Oregon’s State Capitol was closed down on Saturday after the state police superintendent informed the Senate president that local militia groups had plans to rally and protest outside the building in response to Governor Kate Brown’s recent request.

Following Thursday’s legislative session at the State Capitol, 11 Republican senators walked out and did not return. This left the legislature two senators short of a quorum. Governor, Kate Brown responded to the walkout and asked for police assistance to track the runaways down.

Oregon state police agreed to comply, saying in a statement: “OSP will work with the Governor’s office and members of the Legislature to find the most expeditious way to bring this matter to a peaceful and constructive conclusion.”

The Governor’s request brought reactions from many groups, notably militias in the region. One militia, called the Oath Keepers wrote on their public Facebook page, “Gov. Brown, you want a civil war, because this is how you get a civil war.” The group is described as one of the largest radical anti-government groups in the United States by the Southern Poverty Law Center.

Another paramilitary group, the Oregon III% also voiced their support for the runaway senators.

According to The Daily Beast, a source inside the Oregon militia movement said their members are, “willing to put their own lives in front of these senators’ lives.”

The heightened tensions and concern for safety lead to the canceling of Saturday’s floor session.  According to reports, a text message from Senate leadership was sent out, confirming the decision.

A spokeswoman for the Senate president later confirmed the “Oregon State Police ha[ve] recommended that the Capitol be closed tomorrow due to a possible militia threat.”

Another session was attempted on Sunday but was quickly adjourned once it was clear the 11 Republican Senators who had walked out would not return. The session was moved to Monday morning, but according to local reports, the 11 Senators still never showed.

The bill at the root of all the tension is HB2020, a bill that would try to reduce carbon dioxide (CO2) emissions by imposing a statewide cap-and-trade program.  State Senate Republicans oppose the bill because they believe it would hurt lower-income individuals who live in rural areas. They also believe that it should be decided by Oregon voters directly, rather than the Democratic-controlled legislature and the Democratic governor.

Senate Republican leader, Herman Baertschiger, explained in a statement, “protesting cap and trade by walking out today represents our constituency and exactly how we should be doing our job. We have endured threats of arrest, fines, and pulling community project funds from the Governor, Senate President and Majority Leader. We will not stand by and be bullied by the majority party any longer.”

In addition to the HB2020 bill, hundreds of other budget and policy bills are currently being discussed. However, in order for the Senate to conduct business, a quorum of 20 members is necessary, with the 11 senators missing they are two senators short. Oregon’s state constitutional deadline for the legislature to adjourn is June 30, which means any bills not passed by the end of the month will be wiped out.

See what others are saying: (The Daily Beast) (Oregon Live) (KOIN)