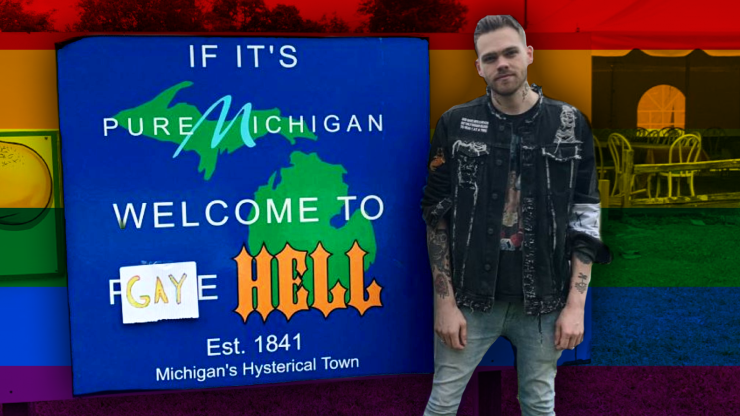 On Monday, the 25-year-old comedian and internet personality announced that he had purchased a small town in Michigan named Hell and has renamed it “Gay Hell.”

In a tweet revealing the move, Daniel explained that he purchased the town in response to the Trump administration recently rejecting requests from U.S. embassies to fly the pride flag on flagpoles during Pride Month.

“Ahead of pride month Trump’s administration put a ban on embassy’s flying pride flags,” he wrote. “So as of today, I am now the owner of Hell, Michigan.”

“The only flags allowed to fly are pride,” Daniel added.

Daniel also included photos from his newly renamed town. “Gay Hell, Mi has everything. A library, a place to lock your love in Gay Hell, and even a WEDDING CHAPEL TO GET GAY MARRIED IN HELL!”

As far as why he purchased Hell, Daniel told NBC News, “I have a young audience who is 16 to 24 who would not be involved in politics if it wasn’t in a funny or meme way.”

“I’m just trying to have fun and get my audience politically active.”

Daniel did not reveal how much it cost him to purchased Gay Hell, but he did confirm that he will only be the temporary owner of the town.  According to the Detroit Free Press, the five-acre town is a commercial property that was on the market in 2016 for about $900,000.

His move was praised by many on social media. Massive beauty YouTuber Jeffree Star tweeted that he was also interested in purchasing land in Gay Hell.

Musician Awsten Knight, a member of the band Waterparks, and YouTuber Jessie Paege tweeted about wanting to go to the town.

Outrage over the flag policy sparked earlier this month after NBC News reported that U.S. embassies in at least four countries were denied the ability to fly the pride flag during Pride Month. Those four countries were Israel, Germany, Brazil, and Latvia.

The report noted that during the Obama administration, the government had granted blanket permission to embassies overseas to fly the pride flag during June. But State Department spokesperson Morgan Ortagus said in a press conference last week that Secretary of State Mike Pompeo “has the position that, as it relates to the flagpole, that only the American flag should be flown there.”

Pence also said that the administration had “put no restrictions” on the pride flag or other flags flying elsewhere at U.S. embassies.

This is far from Daniel’s first eye-catching act linked to LGBT issues and politics. In August of 2017, the social media star made headlines when he served as the mayor of Hell for one day and banned straight people. He was impeached shortly after.

At that time he said the move was in response to Trump’s travel ban. “My ban is a copy-and-paste of Trump’s Muslim ban, but with heterosexuals instead,” he told HuffPost at the time.

That same year he released “The Holy Bible But Gayer,” in which God is Rihanna, Donald Trump is Satan, Eve is renamed Steve, and Jesus turns water into mimosas.

See what others are saying: (NBC News) (CNN) (Mashable)