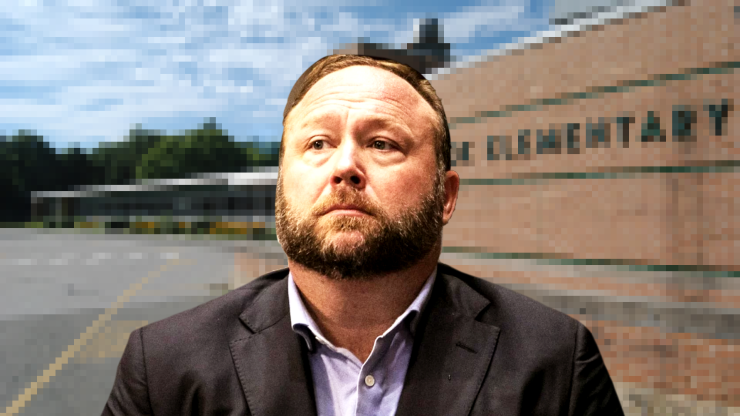 Lawyers representing the families of Sandy Hook victims in a defamation lawsuit against far-right commentator Alex Jones said that they found child pornography in emails from an account for Jones’ show Infowars that had been turned over to them by his legal team.

Jones has famously supported the conspiracy theory that the 2012 shooting at Sandy Hook Elementary School never happened, even going as far as to say that “no one died” in Sandy Hook.

All three of the lawsuits say that Jones’ efforts to spread conspiracy theories about the shooting had lead to the families of the victims being harassed, stalked, and threatened.

In January 2019, a judge overseeing one of the cases ruled that Jones had to turn over Infowars’ financial documents as well as thousands of emails. The next month, the same judge decided that Jones would be required to make a sworn deposition.

Jones gave a three-hour long deposition in March, where he admitted the deaths were real, and said, “I, myself, have almost had like a form of psychosis back in the past where I basically thought everything was staged, even though I’m now learning a lot of times things aren’t staged.”

In court documents filed Monday, the lawyers representing the Sandy Hook families said that when their legal team went through the Infowars emails, they found that the email metadata contained “numerous images of illegal child pornography.”

According to the legal documents, after finding the images, the legal team “immediately contacted the FBI.”

“The FBI directed counsel to give control of the entire document production to the FBI, which was done,” the lawyers wrote. “The FBI advised counsel that its review located numerous additional illegal images, which had apparently been sent to Infowars email addresses.”

The attorney’s also added that if Jones’ legal team “had engaged in even minimal due diligence and actually reviewed the materials before production, they would have found the images themselves,” continuing, “Because the Jones Defendants did not do that, they transmitted images to the plaintiffs that if they were knowingly possessed is a serious federal crime.”

The court documents said that the plaintiff’s legal team told Jones’ lawyer, Norm Pattis, about finding the child pornography. Pattis then told Jones, who talked about it on The Alex Jones Show on Friday.

A little later, Jones specifically named one of the attorneys that represents the families, Chris Mattei. Jones showed a picture of Mattei’s face, then slammed his fist on the photo. “What a good American, what a good boy,” Jones said mockingly. “I’m gonna kill…” he yelled, then trailed off.

In the same court document from Monday, the attorneys for the Sandy Hook families accused Jones of threatening Mattei and his firm.

“Alex Jones broadcast two segments of The Alex Jones Show identifying Attorney Chris Mattei by name and showing a picture of him, falsely claiming that Attorney Mattei tried to frame Jones by planting child pornography in discovery materials produced by Jones, distorting what actually occurred in the discovery process in this case,” the lawyers wrote.

“Here, threats against counsel have been made on air to a very large audience,” they added.

Pattis reportedly responded in a statement claiming that Jones did not threaten Mattei, and said Jones apologized for the statements he made on his show the next day.

Also during his show on Saturday, Jones said: “I’m not saying that the lawyers for the Sandy Hook families set me up or did this.”