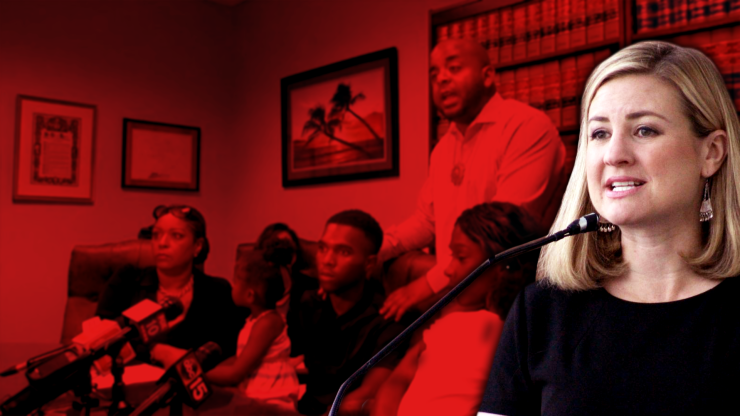 The mayor of Phoenix apologized on Saturday after footage emerged showing police officers drawing their weapons on a couple whose 4-year-old had stolen a doll from a local dollar store.

The incident happened at the end of last month when Dravon Ames and his pregnant fiancee, Iesha Harper, took a trip to a Family Dollar store with their two young daughters. According to the couple, they were unaware that their 4-year-old had at some point taken a doll from the store with her back to their car.

Police say they were tipped off about an alleged shoplifting incident by a store employee. Police then found the couple about a mile away at the apartment complex of their babysitter.

What followed as a heated standoff that was captured in now-viral cell phone footage. Video shows the officers shouting profanities at the parents. Officers can be heard telling the couple to put their hands up. “You’re gonna get fucking shot. Get your f*cking hands up.” one officer said.

While one officer points a gun at her, Harper says the car door was malfunctioning, making it difficult for her to exit the car. The couple’s 4-year-old daughter eventually exits from the back seat. Her mother follows, with her 1-year-old in one arm. An officer yells at her to hand the child over and grabs at the child.

A police incident report says the officers feared the mother was “hiding something” or was reaching for a weapon.

The parents have now filed a notice of claim over the incident. Thomas Horne, the lawyer representing the couple, said the officers committed battery, unlawful imprisonment, false arrest, infliction of emotional distress and violated of the family’s civil rights. In a letter sent to the city last week, he said the family is willing to settle the case for $10 million.

The claim says that officer’s injured the 1-year-old child by pulling on one of her arms when Harper refused to follow an officer’s order to hand over the child.

The filing also claims Ames was thrown against a car and kicked so hard that he collapsed. Then an officer “kept his knee between the father’s legs. He punched the father very hard in the back for no reason,” Horne said.

The claim adds that after Haper handed over her baby to a bystander, the officers placed her and her partner under arrest and said: “I could have shot you in front of your f*cking kids.”

The couple’s attorney said the actions were “traumatic and utterly unjustified.”

On Facebook, authorities said Ames admitted to stealing a pack of underwear and throwing it out the window of the car. He also allegedly said he was driving with a suspended license. But Horne says the couple denies telling officers that Ames had stolen underwear.

Neither side can even agree on the day the incident took place. The family’s claim said the incident happened on\ May 29, but police officers said it happened May 27. Police also said they were only made aware of the video on June 11.

The doll was returned to Family Dollar, according to officials. No charges were issues over the shoplifting, however, authorities issued Ames a traffic ticket for driving on a suspended license and impounded his car.

Phoenix police chief Jeri Williama, posted a video to the police department’s Facebook saying she was “disturbed by the language and the actions” of the officer on camera.

“I do want you to know that I expect our employees to maintain their professionalism and proper training at all times,” she added.

Williams also asked that the officers be taken off the street and placed on desk duty.

Mayor Kate Gallego said she was “sick” over what she had seen in the video, which has since picked up national attention. “It was completely inappropriate and clearly unprofessional,” she said.

“There is no situation in which this behavior is ever close to acceptable. As a mother myself, seeing these children placed in such a terrifying situation is beyond upsetting.”

Mayor Gallego has called for a community meeting on June 18, where the police chief is expected to address the public and answer their questions. She also said that in response to the incident, the city will be speeding up its implementation of body-worn cameras across the entire police department.

“Team ROC has reached out to the family to provide legal support, call for termination of the police officers and ‘ensure the well-being of the children,’”AZ Central reported.

The family’s current lawyer said that if the city doesn’t respond to the claim within 60 days, he can file a lawsuit.

See what others are saying: (The New York Times) (NPR) (AZ Central)