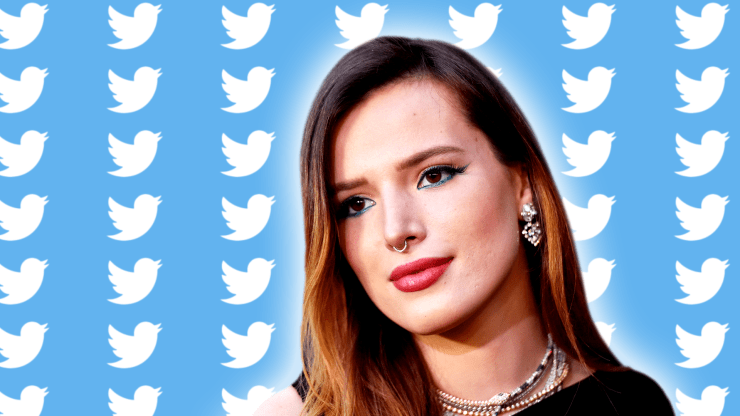 Actress Bella Thorne posted topless photos of herself on Twitter after a hacker threated to release the images that were stolen from her.

On Saturday, Thorne tweeted out screenshots of text messages between her and an alleged hacker, which included nude photos and videos of Thorne. Along with the photos, the actress also included a message to her fans in the tweet, explaining her decision to release the photos.

“I feel someone has taken something from me that I only wanted one special person to see,” Thorne wrote. “He has sent multiple nude photos of other celebs, he won’t stop with me or them he will just keep going.”

She continues, “for too long I let a man take advantage of me over and over and I’m f***ing sick of it, I’m putting this out because it’s MY DECISION NOW U DON’T GET TO TAKE YET ANOTHER THING FROM ME. I can sleep tonight better knowing I took my power back. U can’t control my life u never will.”

The tweet and photos come just days after Thorne’s twitter was hacked. On Thursday, the actress’ social media account was filled with racial slurs and sexually explicit messages. By the end of the day, Thorne had regained control and deleted all the tweets.

Many of Thorne’s fans have praised her, calling her strong and brave for standing up to her hacker.

However, others have questioned her motivation and wonder if this was just a promotional scheme for her new book.

Bella Thorne after pretending to be hacked and leaking her own nudes to gain attention and publicity for her new book: pic.twitter.com/BY7uTRMGHr

In 2014, hundreds of private photos, including some belonging to Jennifer Lawrence, Kate Upton, and Kristen Dunst, were leaked online. According to the U.S. Justice Department, four men used various forms of fake emails to pose as security alerts from accounts to obtain login information and passwords.

They gained access to over a thousand different iCloud and Gmail accounts and were eventually charged with felony computer hacking. All four men ended up in federal prison after being found guilty or accepting a plea deal.

As for pursuing legal options in her case, Thorne says she believes her hacker is likely a minor, so she wants to try and be reasonable.

“This kid sounds like he’s 17,” she told the Hollywood Reporter. “As much as I’m so angry and wanted to f*** him up over doing this to people I just wanted to teach him a lesson. He’s still a kid and we make mistakes, this mistake is a bad one. But I don’t want some 17-year-old’s whole life ruined because he wasn’t thinking straight and [was] being a dumbass.”

“You can’t always tear someone down for their bad sides but more so build up their good sides.”

On Wednesday actress Victoria Justice also had her Twitter account hacked. She has since deleted tweets that were posted without her consent, but it is unclear if hacks against Justice and Thorne are related.

See what others are saying: (The Hollywood Reporter) (Entertainment Tonight) (News18)