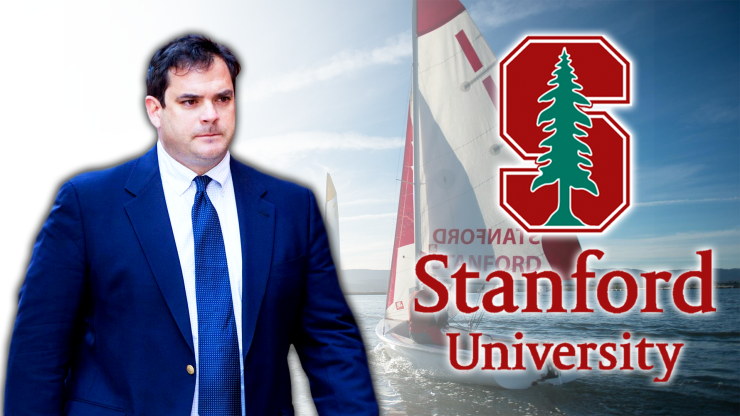 A former Stanford University sailing coach avoided prison time on Wednesday for his role in the massive college admission scandal after a judge handed him a one day sentence, which was counted as time already served.

John Vandemoer is now the first person to be sentenced for participating in the corruption scandal that involved wealthy parents securing their child’s acceptance into top universities by falsifying documents, paying bribes, and altering SAT test scores.

Vandemoer was fired from Stanford after it learned of his participation in the scam. He then pleaded guilty in March to one count of racketeering conspiracy for accepting $610,000 in bribes to recruit two prospective students.  Neither of the students had experience in the sport and ultimately neither ended up attending Standford.

According to the judge and lawyers on both sides, the money did not ever directly hit Vandemoer’s pockets, but instead went to the school’s sailing program.

Prosecutors asked for a 13-month sentence and a year of supervised release, along with a $250,000 fine. They argued that although he did not pocket the funds, Vandemoer still benefited from the corruption.

“While the defendant did not profit financially from his crimes in a directly measurable way … his actions nonetheless enhanced his own status within the university, gave him more money to use for the sailing program he implemented, and furthered his career,” they said.

“His actions not only deceived and defrauded the university that employed him, but also validated a national cynicism over college admissions by helping wealthy and unscrupulous applicants enjoy an unjust advantage over those who either lack deep pockets or are simply unwilling to cheat to get ahead,” the federal prosecutors added.

U.S. District Court Judge Rya W. Zobel ultimately sided with defense lawyers who pushed for the one day sentence, which the judge dismissed as time served. Vandemoer was also ordered to two years of supervised release with six months of home detention and was ordered to pay a $10,000 fine.

“From what I know about the other cases, there is an agreement that Vandemoer is probably the least culpable of all the defendants in all of these cases,” Zobel said. “All the money he got went directly to the sailing program.”

Vandemoer apologized for his actions in court, saying “I want to be seen as someone who takes responsibility for mistakes.”

“I want to tell you how I intend to live from this point forward. I will never again lose sight of my values.” Outside of court, Vandemoer added, “Mistakes are never felt by just yourself, this mistake impacted the people I love and admire in my life.”

“Stanford is a place that I love … I have brought a cloud over Stanford, the amazing students, athletes, coaches and alumni,” he continued. “I have let you down and that devastates me. I have so much respect for all of you and never wanted to let you down, but I did. I will carry this with me for the rest of my life.”

The university vowed to take a closer look at its admission’s policies in the wake of the scandal. Then this week, it said it was studying what to do with the funds that stemmed from the scam.

“We continue to be in contact with state authorities regarding the proper way to redirect to another entity the funds that were contributed to the Stanford sailing program as part of this fraud,” Stanford said.

“We are eager to complete this process and will do so as soon as we have received the necessary guidance.”

Vandemoer was one of several college coaches caught up in the scandal, dubbed “Operation Varsity Blues.” At least 50 people were charged in the federal investigation, including Desperate Housewives star  Felicity Huffman and Full House’s Lori Loughlin.

Last month, Huffman pleaded guilty to mail fraud and honest services mail fraud for paying $15,000 to get her daughter’s SAT scores boosted. She is expected to be sentenced in September.

Loughlin and her husband, fashion designer Mossimo Giannulli, were handed additional charges of money laundering in April and have both pleaded not guilty.

See what others are saying: (The Wall Street Journal) (FOX News) (NBC News)