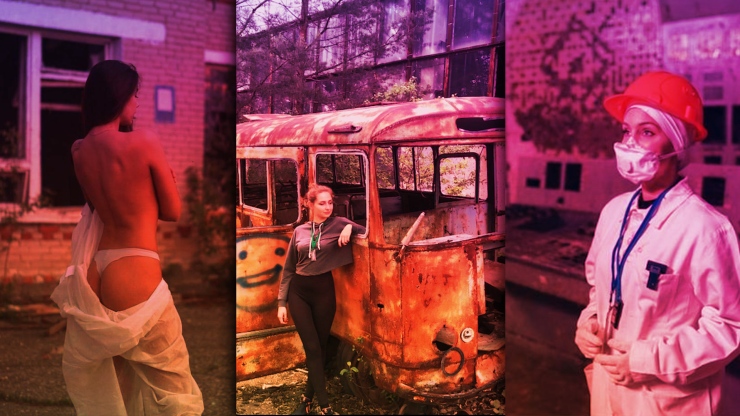 The tweet shows four pictures of different “influencers” using the toxic nuclear power plant as the backdrop for their photos.

However, after further investigation, it seems that only the first photo of a woman in protective gear was shared by a user with a significant following. That user is Julia Baessler, who has over 300,000 followers.

The other three photos were taken from Instagram accounts with much lower follower counts, ranging from 200 to 1,500.

On top of that, as many social media users have pointed out, in her caption, Baessler, talks about the terrible tragedy that took place at Chernobyl. “Yesterday I had the chance to visit one of the most fascinating but also most terrible places on earth- control room number 4 ChNPP,” her caption read.

“The actions taken in this room 33 years ago led to the worlds worst nuclear disaster. Standing there is just indescribable, it’s shocking and something I will never forget :pray:”

Baessler further explained her trip in an interview with Business Insider.

“Because of the engineering work of my boyfriend we were able to get a special admission to go inside control room 4 which is actually not accessible for visitors,” Baessler told BI. “I left those stories online because they are full of informations [sic] and I really want to spread them but I don’t want to be seen as an influencer going to Chernobyl because it’s trendy now. that’s not true,”

Another photo from the tweet showcased a man holding a Geiger counter, an instrument used for detecting radiation. The Instagram user who posted the photo actually wasn’t the photographer or the person in the image. He only reposted it. Patrick Smith, an airline pilot, took the photo back in October of 2006.

The woman who posed next to the burnt bus, Irene Vivch, said she posted the photo because she is from Ukraine and stated so in her caption. She called the site, “an eternal monument to the horrid cruelty of the Soviet regime.”

Vivch told the Atlantic, “Chernobyl made a massive impression on me … So I made a big Instagram post about it describing my feelings.”

In May, HBO aired a new series, Chernobyl, that focused on the 1986 nuclear reactor malfunction at the power plant that caused radioactive particles to cover the surrounding area. At least 30 plant operators and first responders died in the weeks following the accident. To this day, there is still debate on the total possible deaths from cancer caused by the radioactivity, with estimations between 9,000 and 115,000.

According to reports, since the release of the show, trips to the site have jumped dramatically. One tour guide has said in the month of May alone, trips increased 30 percent. The guide also added that trips for the rest of the summer were up 40 percent.

“Many people come here, they ask a lot of questions about the TV show, about all the events. People are getting more and more curious,”  Viktoria Brozhko, a tour guide, told Reuters.

Craig Mazin, the writer and executive producer of the HBO series, responded on Tuesday to the impact his show has had. In his post, he reminded people visiting the area to have respect for those who suffered from the tragedy that occurred there.

Chernobyl is not the first site of a tragedy to be used as an Instagram background. In 2014, a girl took a smiling selfie at the concentration camp, Auschwitz and she received massive backlash. The concentration camp museum even tweeted this past March asking people to people respect the site.

See what others are saying: (Business Insider) (The Atlantic) (Reuters)