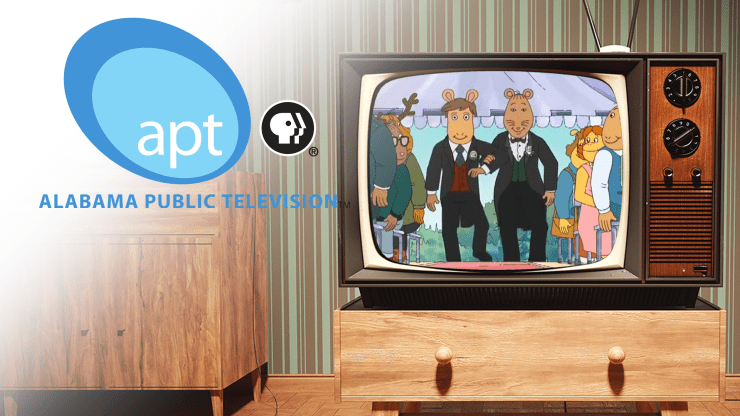 “Mr. Ratburn and the Special Someone”

Alabama Public Television decided not to air PBS’ recent episode of the animated series “Arthur,” which featured a same-sex marriage.

The episode entitled “Mr.Ratburn and the Special Someone,” is the first of the show’s 22nd season. In it, Arthur’s third-grade teacher Mr.Ratburn, marries his partner, a chocolatier named Patrick at a wedding attended by some of his students.

The show aired across the nation on May 13 and was met with widespread praise from LGBTQ rights supporters. However, Alabama Public Television (APT) decided against airing the episode.

Mike McKenzie, director of programming at APT, told NBC News that PBS sent a message to stations in mid-April alerting them “to possible viewer concerns about the content of the program.”

McKenzie and others at APT viewed the episode and decided not to broadcast it. Instead APT chose to air a re-run. “Parents have trusted Alabama Public Television for more than 50 years to provide children’s programs that entertain, educate and inspire,” McKenzie said in an email to AL.com.

“More importantly — although we strongly encourage parents to watch television with their children and talk about what they have learned afterwards — parents trust that their children can watch APT without their supervision. We also know that children who are younger than the ‘target’ audience for ‘Arthur’ also watch the program.”

McKenzie went on to say that if they aired the program, APT would take away the choice of parents who felt it was inappropriate content for their children to watch.

“The vast majority of parents will not have heard about the content, whether they agree with it or not,” he said. “Because of this, we felt it would be a violation of trust to broadcast the episode.”

In a phone call with TheWrap, McKenzie explained a bit further saying, “Our concern is with the subject matter, the marriage of Mr. Ratburn and the other gentleman.”

“We have a fairly large number of people who have a problem with teaching that to their children.”

As of now, the network has no plans to air the episode at a later time. According to McKenzie, parents who want to share the episode with their children can access the episode online at pbs.org.

The news sparked outrage on social media. In several tweets criticizing the decision, many users referenced Alabama’s new abortion law that prohibits the procedure at any stage of pregnancy, making no exceptions for victims of rape or incest. Others called the move an act of censorship

This is not the first time APT has refused to air an “Arthur” episode featuring a same-sex couple. According to AL.com, in 2005 the network pulled an episode in which the character Buster visited a girl who had two mothers.

At the time, then-executive director Allan Pizzato issued a similar statement saying,“’Our feeling is that we basically have a trust with parents about our programming. This program doesn’t fit into that.”

See what others are saying: (AL.com) ((TheWrap) NBC News)