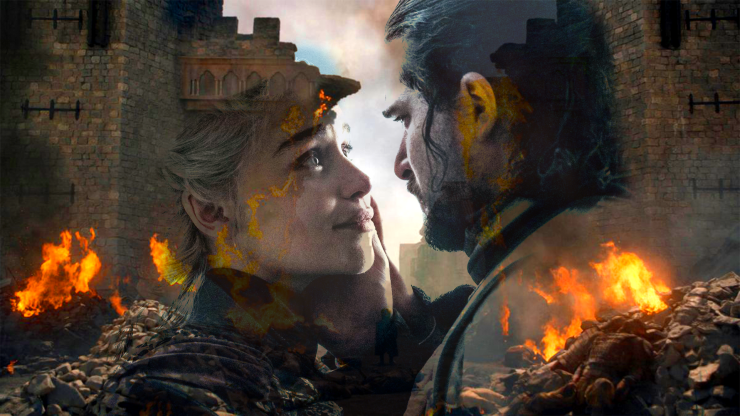 The ending of last night’s finale for Game of Thrones left some fans complaining about the writing once again and incited new frustrations over two water bottles that made it on-screen.

After the questionable choices made in last week’s episode, many fans were expecting to be disappointed by the ending and oh boy were they. This isn’t really surprising since the petition to redo season 8 with “competent writers” now has more than one million signatures.

It’s also probably the reason why showrunner David Benioff told Entertainment Weekly that he and D.B. Weiss planned to spend the finale “drunk and far away from the Internet.”

After finding out who would sit on the Iron Throne, fans complained that the ending ignored foreshadowing from previous seasons.

The sad thing is…if this ending has been properly set up…I would have liked it. It feels fitting. Just not HOW they got there. #GameOfThrones

However there were some people that felt the ending stayed true to the characters and followed through on what was set up.

On Rotten Tomatoes Season 8 is the lowest rated season with about 70 percent compared to every other season that has more than 90 percent approval. Sunday’s episode specifically has a score of 58 percent, which is still not the lowest rated of this season. That spot is still claimed by last week’s episode, “The Bells.”

To add to the frustrations around the season, there were two water bottles left on-screen during the same scene. Though unlike the Starbucks cup that has since been digitally removed, both of the water bottles were partially hidden underneath chairs and behind legs.

What About the Books?

Amid all of the complaints and calls for a rewrite, some are hoping that the books behind the series will have a better ending since the show raced ahead of where author George R. R. Martin left off a few seasons ago.

Martin told Weiss and Benioff his plans for how he imagined the story should continue, however, the writers still made some narrative changes.

Even so, the changes might not be too far off from how the book series will close. In an interview with 60 Minutes last month, Martin said, “I don’t think Dan and Dave’s ending is gonna be that different from my ending.”

So, for now, fans will have to wait and see if the books will end in a more satisfying way, especially after the response the final season faced.