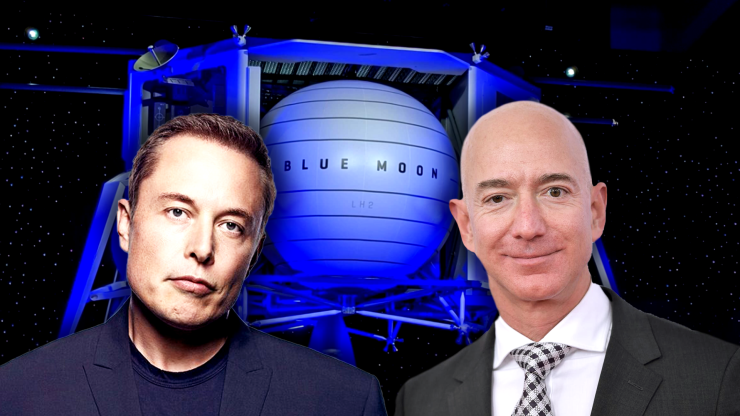 Amazon Founder Jeff Bezos announced his plans to send humans to the moon by 2024, a plan that was criticized by many including fellow-billionaire Elon Musk.

On Thursday, Bezos introduced the world to Blue Moon, the first lunar lander by his space company Blue Origin. He said that the vehicle can carry 3.6 metric tons to the moon’s surface. A stretch tank version could take over six tons. His goal is to establish a human presence on the moon.

“We were given a gift — this nearby body called the moon,” Bezos said during his presentation. “It’s time to go back to the moon and this time stay.”

The tech giant brought up Vice President Mike Pence’s goal of getting back to the moon by 2024.

“I love this, it’s the right thing to do,” he said. “We can help meet that timeline, but only because we started three years ago.”

The craft is designed to take payloads of infrastructure like tools, rovers, and other equipment to the moon. People would come after.

His long-term goal is to build self-sustaining colonies, though he acknowledges that this is a project that would likely be left up to future generations. His motivation for putting life on the moon is to help Earth. He believes that by spreading the population to areas with new resources, we can save the resources on our planet.

Musk and Others Criticize Plan

Establishing human presence on the moon in five years sounded like an ambitious plan to some who watched, eliciting a variety of reactions. Notably, Tesla and SpaceX mogul Elon Musk responded on Twitter, making a meme out of Bezos’ project. In it, he posted a modified photo where the lunar launcher was called “Blue Balls.”

Musk’s SpaceX is a rival company to Blue Origin. Last year, Musk accused Bezos of copying his plan for getting satellites into space. Despite the history of making jabs at Blue Origin, he also said that “competition is good.”

But Musk was not the only person who saw Bezos’ major announcement as worthy of criticism. Many were upset that Bezos did not have a public live stream of his presentation and instead waited to share the video of the announcement until later.

Musk often does live streams of critical company news, prompting many others to ask why Bozes did not follow suit.

Others, like journalist Dave Levitan, thought that Bezos has enough problems with Amazon, and should focus on that instead of working on something so expansive and new.

Meanwhile, others came to Bezos’ defense, applauding what this project could mean for the future. Everyday Astronaut, which is a YouTube channel devoted to space education, said people should “get excited.”

Dava Newman, an Apollo Professor of Aeronautics and Astronautics at the Massachusettes Institute of Technology, received a tour of the Blue Moon and shared her excitement on Twitter.

See what others are saying: (CNBC) (Gizmodo) (Inc.)