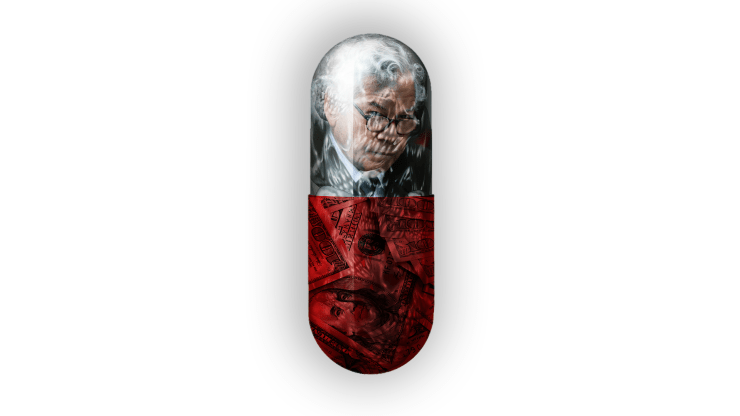 Top executives of the drug company Insys Therapeutics were found guilty of racketeering charges on Thursday for the company’s role in contributing to the nation’s opioid crisis.

The company’s founder and former chairman, John Kapoor, and four other former executives were convicted of conspiring to increase the sales of their opioid spray, Subsys. They did this by giving insurers misleading information about the drug to encourage them to cover its cost. According to the Associated Press, the spray is meant for cancer patients. It can cost up to $19,000 a month.

They also bribed doctors to prescribe the drug at a more frequent rate, and to patients without cancer. Some of the forms of bribery include financial compensation for fake academic speeches and giving doctors lap dances.

The others who were convicted were former national sales director Richard Simon, former vice president of managed markets Michael Gurry, and former regional sales directors Joseph Rowan and Sunrise Lee. A witness claimed to have seen Lee, who is a former exotic dancer, give a doctor a lap dance.

Kapoor and the other executives could face up to 20 years behind bars.

The trial lasted ten weeks, and jury deliberation went on for 15 days. The jury watched a music video that Insys aired during a company meeting 2015. In it, a rap is meant to encourage employees and compel them to boost their sales of Subsys.

Other former employees, including Alec Burlakoff, the former Vice President of the company, pled guilty. Burkaloff is allegedly in the rap video, and is the person dressed as a bottle of Subsys. In court, he testified against Kapoor.

Kapoor’s lawyer expressed disappointment in the jury and their verdict. “Four weeks of jury deliberations confirm that this was far from an open-and-shut case,” she said in a statement, according to the New York Times.

“We will continue the fight to clear Dr. Kapoor’s name.”

Massachusetts U.S. Attorney Andrew Lelling said that this conviction was a big step for the country as it battles the deadly opioid epidemic.

“This is a landmark prosecution that vindicated the public’s interest in stanching the flow of opioids into our homes and streets,” he said in a statement.

According to the Center for Disease Control, in 2017, 47,600 died from opioid overdoses. Sixty-seven percent of all lethal drug overdoses in 2017 were from opioids.

CDC stats also say that 130 people die every day from opioid overdoes in the United States.

Mother Who Paid $6.5 Million in College Admissions Scam Says She Was Tricked